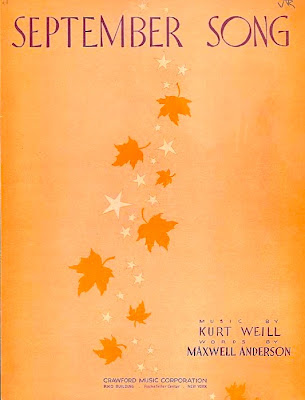 It is quite easy to see why Kurt Weill and Maxwell Anderson's "September Song" from the 1938 Broadway production Knickerbocker Holiday has been front of mind as of late. While Summer still lingers (particularly for those experiencing Indian Summers), the days truly grow shorter and it is only a matter of weeks before Autumn will begin to show its colors. 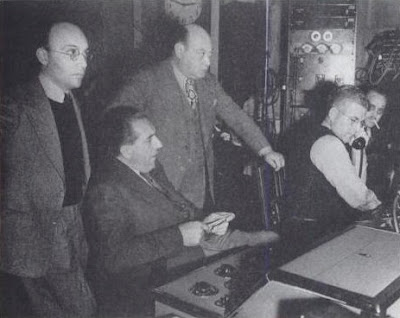 German-born Jewish composer Kurt Weill had been living in New York City for 3 years in 1938. His residence in the most American of American cities marked the end of the first phase of his career in which he contributed greatly to the Weimar Republic soundtrack thanks to his rightfully celebrated collaborations with Bertholt Brecht. While in Germany, Weill was not only an active in populist left-wing politics but his music was celebrated the world over by avant-garde modernist composers such as Stravinsky, Berg, and Milhaud. Fleeing the Nazi regime, Weill and his wife settled in New York after short stays in both London and Paris. Weill soon began to self-consciously reshape his music to fit the mold of his adopted country. To show just how far he had come, 1938 saw him not only his collaboration with Anderson premiering on Broadway, but he spent some time in Hollywood scoring a movie for the Austrian-expatriate, Fritz Lang. 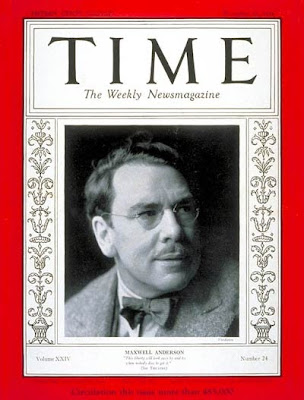 Maxwell Anderson was a somewhat odd pairing for Lang. Born in Pennsylvania in 1888, he was twelve years Weill's senior. A scholar and writer, Anderson was also an outspoken pacifist - something that jeopardized his professional career on more than one occasion. Bouncing between writing and teaching jobs from North Dakota to San Francisco, he eventually ended up in New York in 1918 working as a journalist and playwright. Before meeting Weill and working with the composer on Knickerbocker Holiday, Anderson had experienced several Broadway hits. But what was perhaps most interesting about this particular stage production was the sub-text of the play. With the memory of the executions of Sacco and Vanzetti only 11 years old in 1938, Anderson had more than a passing interest in leftist-influenced anarchism. In fact, Knickerbocker Holiday is most often characterized by critics as a thinly veiled attack on then-President Franklin Delano Roosevelt's New Deal, something Anderson felt veered to close to the fascism that was dominating Europe at the time.

One of the stars of Knickerbocker Holiday was 55-year old Walter Huston, who requested a song be written for his character of advanced age to help woo a younger love interest. Weill and Anderson obliged with 'September Song' reportedly written start-to-finish within the span of a day. With it's roots going back at least as far Geoffrey Chaucer's 14th Century 'Canterbury Tales' (see The Merchant's Tale), the symbolic use of months of the year to represent differing ages was certainly nothing new in the late-1930s. But Weill and Anderson managed to breathe some new life into a well-worn device as well as come up with a rather touching plea for love. It's not terribly sentimental, but rather sweet lyrically and the music manages to hint just enough at the inevitability of the protagonist's demise without being morbid. 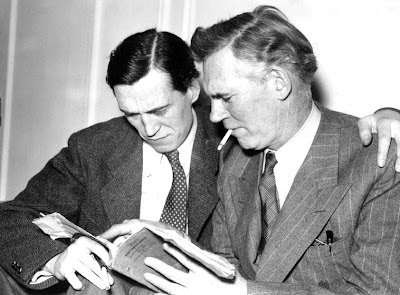 Irish-American Huston, the father of maverick film director and actor John Huston, and the grandfather of actors Angelica Huston and Danny Huston, had a minor chart hit with his original 1938 recording of 'September Song'. Huston's version was allegedly President John Kennedy's favorite song, with JFK performing the number for private affairs, intoning Huston's croon. Whether or not Jack was aware of the politic undercurrents of the song's source it not something that is documented. In addition to their other post-1938 achievements, all of the principals eventually found varying degrees of success in Hollywood: Huston won an Academy Award in 1948 for his supporting role in The Treasure of the Sierra Madre; Anderson wrote the screenplay to Alfred Hitchcock's The Wrong Man in 1956; and Weill scored a select few films. When Kurt Weill died in 1950, Maxwell Anderson delivered the eulogy. At the time of Weill's death 'September Song' experienced a resurgence of popularity, thanks in no small part to its use in that year's September Affair motion picture and by the end of the decade it was firmly established as a standard in what is now called the Great American Songbook.

Further reading: follow this link for a more musical look at the song.

Further listening: give this great 1946 version a listen by pianist/vibraharpist Dardanelle featuring Joe Sinacore on guitar which makes for an interesting comparison to Teddy Wilson's 1944 version featuring Sarah Vaughan on vocals, Remo Palmieri on guitar, and Charlie Ventura on tenor saxophone.
Posted by Nick Rossi at 11:52 PM

A beautiful song really perfect for these days. An endlessly listening for me in september, as i finished reading "Dodsworth" by Sinclair Lewis. Thank you!

Bonus points for the Dodsworth/Lewis/Huston connection! Thanks for the comments.

Another one of the many excellent versions of this song. Maggie was a good one that does not get nearly the amount of ink and respect that he should.