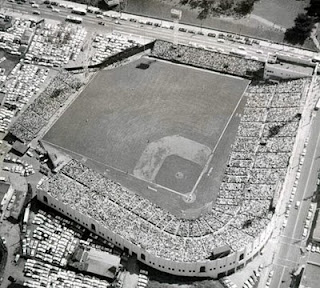 April 16, 1958
Photo by George Place, courtesy of the SF Public Library
San Francisco Giants first home game
Seals Stadium, 16th (top) and Bryant (right) Streets, San Francisco
Don't worry, I am not taking things in a whole new direction over here. I just wanted to give a nod to not only the San Francisco Giants, but also to the legacy of the San Francisco Seals at whose stadium in the Mission the Giants played for the first couple of seasons. What really got me interested in the topic, was this EXCELLENT post over at Burrito Justice, which will be of particular interest to those of you Missionites out there. I love "chasing ghosts" and these guys are after my own heart.
While you are at it. Did you know that The Mission had its very OWN baseball team at one point of time? And no, I am not talking about the Seals again. True story. The Mission Reds. Read a bit about them here. Who knew?
Posted by Nick Rossi at 1:01 AM No comments: 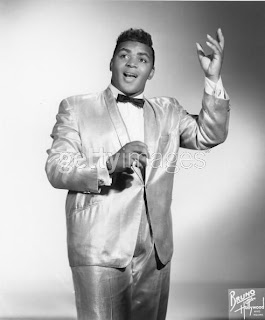 Goodbye Baby (Baby Goodbye)
A good discography of his original releases...
...Red Kelly's excellent biographical weblogs entries on the man here and here...
...and one of his best (and fairly unknown) Atlantic recordings...
Solomon Burke, the King of Rock and Soul, was a true one-of-a-kind. I honestly don't think that anyone really knows what we lost when we lost him over the weekend. He is the stand-out in Peter Guralnick's compendium of stand-outs, Sweet Soul Music. He is the only voice that could fill the void left at Atlantic when Ray Charles left for ABC-Paramount. Heck he even beat Ray Charles to the Country & Western punch with his first hit, a 1961 recording of a Willie Nelson tune. I shall eternally regret every time I passed by the opportunity to see him perform (and there were a few).
Now do your self a favor and go download his version of Dan Penn's "Uptight Good Woman" - heck, go buy a copy of the original 1969 single on Bell. Although his Atlantic Records stretch provides much of the basis of his legacy, his 1969 sessions for Bell Records cut down in Muscle Shoals are pretty damn near perfect and completely unbelievable at times. They might even be some of the best records cut that year anywhere. Maybe. His version of "Uptight Good Woman" is a perfect reading of the tune, made all that much better by Penn's harmony vocal. This is soulful music of the highest order and a duet that is on par with Sam Cooke and Lou Rawls doing "Bring It On Home To Me". It's that good. Seriously.
Goodbye Baby. Baby Goodbye.
Posted by Nick Rossi at 8:20 AM 1 comment: 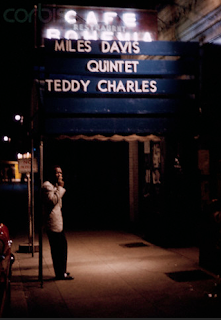 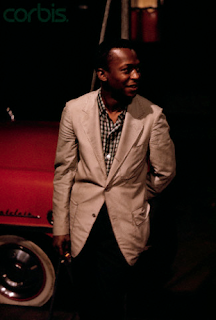 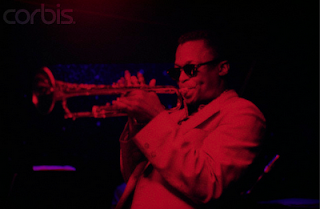 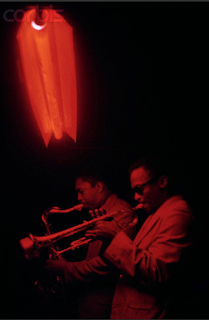 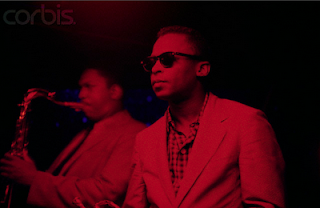 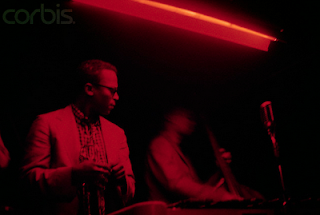 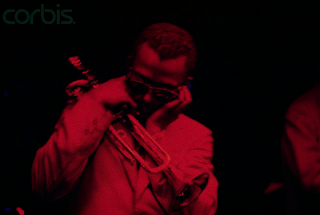 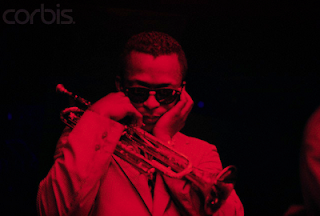 There is a GREAT sequence of color photos of Miles Davis available over at Corbis taken by photographer Marvin Koner. Koner most likely shot these in June 1956 at Cafe Bohemia in Greenwich Village, New York, NY.
Cafe Bohemia was located at 15 Barrow Street between West 4th and 7th Avenue South. The Barrow Street Ale house currently resides in the location. A very historic stretch of Manhattan - bohos Steve McQueen and Jason Robards reportedly rubbed shoulders with sundry beat poets at the nearby Louis Tavern. According to a June 13, 1956 article in The Village Voice, the genesis of the cafe as a jazz venue directly involved Charlie Parker. Parker was crashing at poet Ted Joan's apartment at 4 Barrow Street in 1955 and frequented the bar across the street (favoring Brandy Alexanders). The bar/cafe had been owned by lifelong Villager, Jimmy Garofolo, since 1949 who had tried to pay the bills by utilizing the space as everything from a restaurant to a burlesque house. After being thrown out for drinking without any way to pay his tab, Parker offered to play a gig at the Cafe Bohemia. Garofolo didn't know Bird from Adam, but took him up on his offer and advertised the gig which attracted A LOT of attention from the hipsters and jazz fans. Unfortunately, Parker died on March 12, 1955 before he could play the gig, but the interest stirred up by the booking encouraged Garofolo to take his chances with using the space as a jazz venue. Within the year, Charles Mingus had recorded a disc there for his own Debut Records as had Art Blakey's Jazz Messengers for Blue Note Records. By 1956 it was one of the top jazz clubs in New York City.
Miles Davis has only recently signed to Columbia Records at the time of these photos and had yet to have his debut LP on that label released. In fact, he had just (on June 5) completed his second of three sessions at Columbia's famed 30th Street Studios which would yield 'Round About Midnight, the disc that the label would release on March 18, 1956. Davis was in his ascendancy. He had been clean for a number of years, made something of a "come-back" at the 1955 Newport Jazz Festival, and had been leading one of his first steady combos in quite a while. More to the point, he was leading a combo which later became known to the cognoscenti as "The First Quintet" featuring Davis, John Coltrane (tenor sax), Red Garland (piano), Paul Chambers (bass), and Philly Joe Jones (drums). The group had debuted at the Club Las Vegas in Baltimore on September 27, 1955 and made their New York debut at Birdland in mid-October of the same year, during which time the Columbia Records deal was sealed. It was also during this period that the group recorded over 6-albums-worth of material for Prestige Records - the independent label Davis was leaving for major-status Columbia. Cafe Bohemia was something of a home base for the Quintet throughout 1956 as it played several extended engagements there throughout the year.
What photographer Koner (who seems to have only been freelancing for Columbia at the time) captured in the above photos - including the last one, which was cropped and used on the cover of Miles's Columbia debut - is a vibrant immediacy that is so often lost in archival black and white photos. Now, don't get me wrong - I LOVE black and white photography - as well as old photos in general, but seeing Miles and John Coltrane in glorious 1956 color just brings them to life as people, rather than historical characters. And of course any fully illustrated chance to catch a glance at Davis's sartorial stylings is ALWAYS welcome. Dig that rolled sack seersucker jacket and Madras plaid casual sport shirt. Well "casual" and "sport" in the 1956 sense of the words, at least. Ivy League indeed. It's also the details the suck me in: the red fluorescent stage light, the Cadillac-grill Shure microphone, the sunglasses Miles is wearing...
Here's a clip of what the Miles David Quintet sounded like "live" in Philadelphia a few months after the photos were taken (Bandstand USA radio broadcast from the Blue Note Club on December 8, 1956):
Posted by Nick Rossi at 8:57 AM 2 comments: