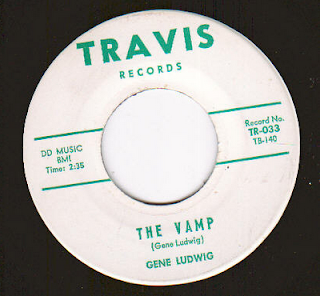 I recently mentioned the passing of the one of the great, unheralded masters of the Hammond organ, Gene Ludwig. Although he was fortunate to enjoy some latter-day recognition, his name is not one often associated with the legends, but he truly possessed the chops to sit at their table. My childhood friend, John Kent (drummer for The Loved Ones and my own Nick Rossi Set), was the first person to hip me to Gene - slipping me a copy of his 1964 Mainstream LP Organ Out Loud sometime in the mid-1990s. I was floored and continued to pick up his discs where I could. I quickly figured out that much of his early discography consisted of 45s on various local independent labels, which endeared Ludwig even more to me.
A new weblog has been launched here devoted to "keeping record of Pittsburgh's unrecorded recorded history." Their inaugural post is dedicated to the vinyl discography of Gene Ludwig which spans 1962-1987. Many of the discs are illustrated and the site is VERY rich in information. On top of that, there is a sister site on YouTube which features many of the recordings, so you can get yourself a taste of Gene's excellent playing.
Side Notes: I was fortunate to play a role in helping set up a gig for Gene at Club Deluxe up on The Haight here in SF a few years ago, which was his first San Francisco performance in a LONG time. It was a truly ear-opening show. A couple of years later, Gene (without notice) called up onstage to play a tune with his trio at Jazz at Pearl's in North Beach. Nobody knew it at the time, but that was the last time I played the Hammond organ "live." Regardless, the experience was a swift kick in the behind - in the best way possible - and I will always remain grateful to him for that. Finally, while we are dishing out credit, I should mention that in addition to hipping me to Gene, John Kent was also the person responsible for turning me onto Willie Mitchell's unbelievable body of work as a bandleader. Thanks John, wherever you are.
Posted by Nick Rossi at 7:37 AM No comments: 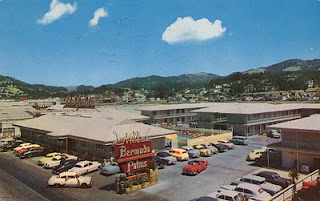 Bermuda Palms
737 Francisco Boulevard
San Rafael, California
The above postcard was taken from this Flickr photostream and is dated 1967. Judging from the cars in the lot the photo was taken MUCH earlier. The caption on the rear reads:
California's Las Vegas - a complete hotel resort. Coffee Shops - Cocktail Lounges - Banquet Rooms - Ballrooms for Dancing - Auditorium - Swimming Pool.
Perhaps. Many seem to remember The Palms as a fairly sleazy spot in a not very nice part of San Rafael in the 1970s-1980s. But it did certainly have a colorful history well before that time.
In 1955, Robert Mitchum was hired by John Wayne's production company to star in Blood Alley which was partially filmed in San Rafael. According to Lee Server's Mitchum biography, the actor had driven up to the hotel, where the production had booked several rooms, from Palm Springs in his Jaguar. Mitchum was reportedly (and violently) not happy with his initial room, so was upgraded to a room about the film's director. The actor was in a celebratory mood and with several friends and kept the director up for much of the night. A minor fracas occurred between the actor and director which was later blown out of proportion by the press and Mitchum was dropped from the film.
In 1962, San Francisco MUNI Driver and soon-to-be record label owner, W.C. Stone, "discovered" Doug Cox (guitar & bass guitar), John Allair (Hammond organ & piano), and Pete Lind (drums) appearing in the cocktail lounge as the resident Doug Cox Trio. Stone was floored and took them under his wing, released 3 singles (re-christened The Cals, using the first letters of each of their last names) by the group on his fledgling Loadstone Records label. They also became something of a house band for the label's R&B singers, with Allair sometimes providing arrangements.
By the late-1960s the hotel ballroom that once had hosted performances by the Duke Ellington and Count Basie Orchestras was known as The Citadel (and later Pepperland), presenting the likes of The Sons of Champlin, The Grateful Dead, and Big Brother & The Holding Company. A decade later it was more well known for its transient residents and links to the drug and skin trades.
The Bermuda Palms is now a Motel 6.
Posted by Nick Rossi at 10:59 AM No comments: 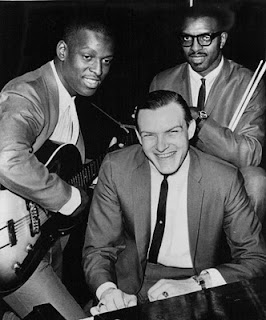 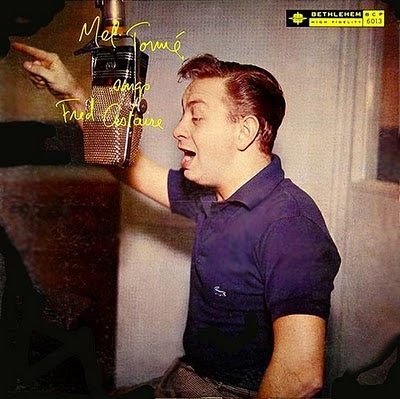 Vocalist, drummer, composer, and actor Mel Torme was 30 years old at the time of this LP cover photo. By this time he had already written what would become his most famous composition "The Christmas Song" and had attained some degree of notoriety as the leader of a vocal ensemble (Mel Torme & his Mel-Tones) with Artie Shaw's Orchestra and as a solo singer. Born in Chicago, he had started to spend an increasing amount of time in Los Angeles during the late-1940s. He had his first (and only) number 1 hit in 1949 with "Carless Hands" on the then independent label Capitol Records. The following year his California Suite was the first 12-inch LP released on that label. His association with Bethlehem Records began in 1955, important not only for the music it produced but for the fact that Torme was able to pick his own material and arrangers. He chose, wisely, Marty Paich who parlayed the cool jazz sounds of the Miles Davis Nonet and the Gerry Mulligan Tentet into his own outstanding Dek-tette. Although he briefly had had a television show in the early-1950s, he (much like Astaire) adding acting to his resume the year after this LP.
The Lacoste brand was 23 years old at the time of this LP cover photo. Founded by a retired tennis player, by 1939 it had developed a reputation within its native France as a high-quality garment, but it's production was interrupted by the Second World War. In 1951, the company not only began exporting products (initially to Italy), but it also added a range of colors alongside it now semi-famous white "chemises." The following year, Lacoste polo shirts made their first appearances here in the United States, initially licensed by American businessman Vincent Draddy through his Izod organization. Draddy bolstered the reputation of the brand by making sure his friends such as President Eisenhower and Bing Crosby were seen wearing Lacoste polos.
Unlike Torme, Lacoste would have to wait until the 1980s to reach its peak in popularity.
Posted by Nick Rossi at 4:44 AM 2 comments: 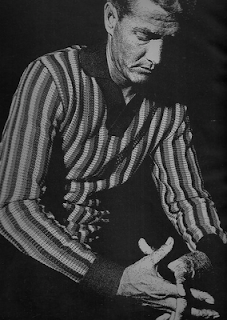 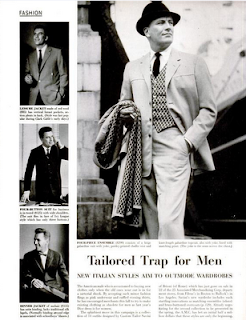 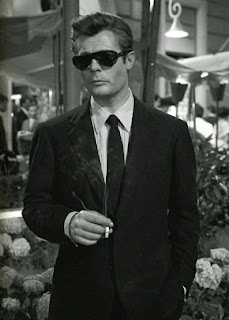 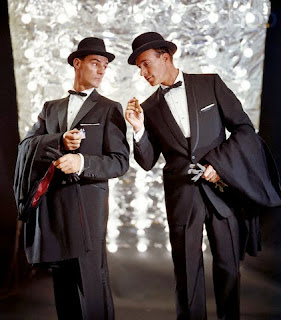 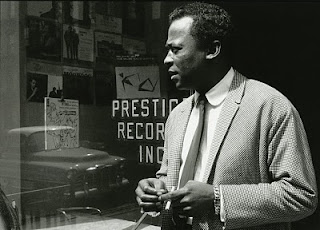