Messrs. Merriam and Webster define serendipity as "the phenomenon of finding valuable or agreeable things not sought for." So, how does this grab ya? I made a fairly last-minute decision to attend the San Francisco's Symphony performance this past Sunday afternoon. Stravinsky, Bernstein and Ravel were on the bill and the sound of modern classical music performed live by a symphony orchestra never fails to really thrill me. Seriously. At any rate, I set out by foot to the symphony hall early in the afternoon with the intention of buying whatever ticket I could get my hands on. Arriving at the box office I was told that "rush" tickets were available for a mere $20. What more, I could sit front row center, if I so chose. Yes, I did choose. Once I was settled in my seat, the program notes informed me that the Stravinsky piece would not be performed due to performer visa/immigration problems. Well OK, I thought, Lenny and Maurice would have to see me through.
Michael Tilson Thomas (or MTT if you are into the brevity thing) made his typical grand entrance at the appointed time and promptly informed us that while the Stravinsky chorale would not be performed that he would be treating us all to a 3-movement "Ode." Yes, a treat indeed. What more, this particular piece featured a middle section originally written for the Sir Laurence Olivier film version of Jane Eyre. It would seem Igor yearned to break into the film composing game, something I never knew about the Russian genius. It was an excellent, if brief, piece of music which was followed by Leonard Bernstein's ...
The second half of the program held the biggest surprise though. Maurice Ravel's Daphnis et Chloé was originally written as a ballet and was the longest piece of music the composer wrote. Its dynamics really need to be heard to believe, while it ran the whole gamut of musical emotion. I am being serious here people. I will 'fess up to nodding off at one brief moment, when the clarinets and harps lulled me into a beautiful deep submission. In fact, I found myself daydreaming - wondering what it would be like to have "lounge seats" at the symphony where an afternoon lie down would not be frowned upon. But I snapped to, made sure the conductor did not notice my transgression and focused back on the music. Yes, I could almost read the music of the first violinist who sat a few feet from me.
And then I made a connection.
What was that riff? OK, motif as the long-hairs would call it. But where had I heard that before?
Hear it? Listen closely. I did. And then it hit me.
OK, so the above may not be the best performances of the pieces in question, but you get the idea. Of course, once I got home I hit the Google machine and several pages made mention of the relationship between the two pieces of music. I just love the serendipity of it though. Perhaps it is time to go back and give Stan Kenton's Orchestra a little more ear time? Perhaps.
Posted by Nick Rossi at 4:39 AM 2 comments: 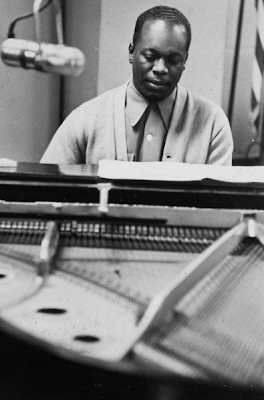 Sharon Jones & The Dap-Kings at The Apollo Theater (2010) 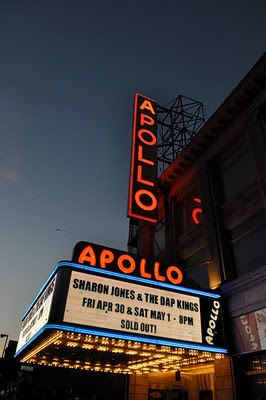 Harlem, New York, NY
Photo by Ryan Barkan
There are some more excellent pics here, including The Dap-Kings sporting continental cross-over ties, which of course get my whole-hearted seal of approval.
Posted by Nick Rossi at 3:01 AM 1 comment:

What I love about the JazzWax blog is the way the author manages to convey his enthusiasm about his subject matter. I nearly almost "walk" away from the blog with the desire to download the tracks he mentions, be it a known quantity like Charlie Parker with Lennie Tristano or someone who I never thought to be up my street like Helen Merrill or Joe Mooney. Marc also does a great job illustrating his posts. Take this post for example. Sure, I like Shelly Manne. In fact, nearly every time I hear him play I think, "Man, is this guy under appreciated and sadly forgotten." Well, Marc addresses exactly that and does so quite well. If you are a fan of the jazz music, I strongly recommend you make this blog a habit.

I nabbed one of Marc's photos (apologies to the copyright holder, but there is a purpose to all of this) 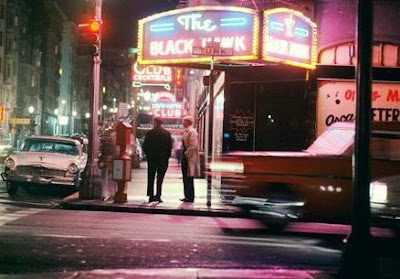 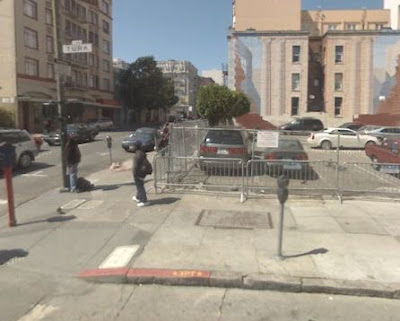 Thanks to miracle products over at Google we can see just exactly what the same spot looks like today. What a shame.

The Tenderloin (as that particular neighborhood is known) has been San Francisco's skid row certainly ever since I have been in the City (1989). There's always been a few good bars and nite spots to attract the likes of me, but overall it's pretty rough going and a pretty grim reminder of the cost of urban living.
Posted by Nick Rossi at 1:01 AM No comments: