Rarely does much time pass these days, before I find myself mourning the loss of yet another musical hero. We are truly witnessing the end of an era, as the last members of jazz music's great generation set exeunt for their big sleep. It's part of life, for sure, and certainly one of the pitfalls for those of us who admire so much the achievements of the 20th Century. Case in point: as I was sitting down to write this piece, I learned of the death of drummer Donald "Duck" Bailey. There isn't even an obituary posted, as I type these words, for the man who designed the template for modern jazz organ combo drumming and accompanied the master Jimmy Smith for years in clubs and on Blue Note LPs. Another one gone. May he rest in peace. 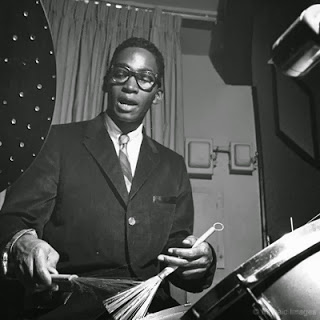 And yet. And yet, I find myself actively (desperately?) looking these days for living, breathing, and thriving threads that connect back to where much of this begins for me. And in this spirit, I present Eddie Diehl. Who is Eddie Diehl? Well, for me that was just a name on a few random early-'60s Prestige jazz LPs by Brother Jack McDuff, Sonny Stitt, and Gene Ammons. Frankly, I never paid him much mind. I just figured he was another one of the cats like fellow guitarists Thornell Schwartz and Eddie McFadden. Forces to be reckoned with back in the day, for sure, but background voices perhaps somewhat doomed to obscurity, who may or may not have been given the proper respect of an obituary when that bell tolled. 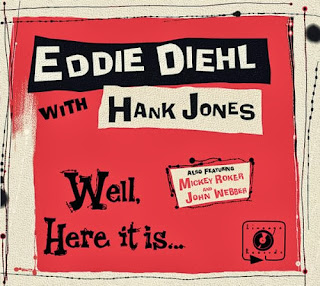 But Eddie Diehl is alive and well and living in Poughkeepsie! Well, close enough at least. It turns out Eddie lived quite a storied life. Back when I was making music on the Hammond organ (1996-2007), I spent a lot of time absorbing the lessons to be learned in groves of those Smith Blue Notes and McDuff Prestige sides. But somehow I never quite grasped that Eddie was a regular member of McDuff's working group, arguably the finest jazz organ combo of its day, second only to Jimmy Smith's trio. Yes indeed, Diehl was Grant Green's replacement in late 1961 and stayed with McDuff (as the only white member of the combo, I should add) for nearly two years. His replacement? George Benson. Re-listening to Eddie's contributions to a disc like 1962's Brother Jack Meets The Boss, it is clear that Eddie was heavily influenced by bebop, but a working musician follows the money and Diehl spent much of the 1960s and 1970s working the organ rooms. By the end of the 1960s his discography all but sputtered out.

Diehl moved upstate and re-focused his talents on luthiery, something that he now has a tremendous amount of notoriety for. But he never stopped playing. Occasional sessions would come up such as Al Haig's 1983 Manhattan Memories, but it was not until 2006 that Eddie had the opportunity to cut his first disc as a leader. Well, Here It Is gives you some indication of Eddie's self-effacing attitude, but it gives a better indication of what a lyrical, beautiful guitarist he is who obviously has spent more than a little time not only with his Charlie Christian and Charlie Parker records, but also with his George Van Eps books.

Fortunately, Bart Thrall took it upon himself to film an extended interview with Eddie and share it with us all up on YouTube. Granted, it's not the most professional "movie" and could probably use the guiding hand of a good editor, but it is a soulful little piece that means a lot to those of us who dig hearing stories of what it was like to be on the road with Jack McDuff in the early 1960s. It also adds a lot to the legacy of Diehl and celebrates a living, breathing, and musically vibrant exponent of this music that is all but vanishing before our very eyes.


Duke Ellington's Prelude To A Kiss performed by Eddie Diehl, 2010

Eddie talks about his 1934 D'Angelico Model A guitar
Posted by Nick Rossi at 10:55 PM

Eddie is one of my best friends, and a great player. (I am also a jazz guitarist). One thing: Manhattan Memories, the tune on the LP of the same name, is in actuality a minor blues by Eddie called Be Bu (written for organist Bu Pleasant. Somehow, probably because the tune wasn't registered by Eddie at the LOC, it was appropriated and composer credit given to Al Haig. Just thought I'd mention that. Eddie will be appearing in celebration of his 80th birthday at Smalls on June 18,7:30-10. The band will be Eddie and myself on guitars, John Beal, bass, and Taro Okamoto, drums. Every guitarist and jazz fan within listening distance to Smalls ought to come to this rare appearance---or at least listen on the webstream. It's going to be a special night...

Thank a lot for the post and the information Joel. I am on the wrong coast for this event, but truly hope that I can see Eddie play some time soon. My sincere best wishes to you both.

Thank you, Nick. I think you can listen at Smalls webstream for a very modest fee. Just go to www.smallsjazzclub.com and follow the prompts. Thank you for your interest in our gig.

Thank you so very much to both Joel and Nick for their commentary on my dad. He's a wonderful father, a great listener, consummate musician and repairer of cherished instruments.
80 is an impressive number. Hope to be there.
I should see if he can get an honorable mention at the Grammy's, since he's played on so many albums? :)

Thanks for information. Eddie's playing is beautiful. I really want to see he play . Where can I get the performance date?
I only know Eddie played on Jack MacDuff and Hank Mobley , could anyone help me get more dig into it.
Sincerely thanks to you !

R.I.P. Eddie. We're all going to miss you at your local watering hole, and your fantastic playing at several Hudson Valley venues.

Thank you for sharing the information Chris. May this wonderful musician rest in peace.

Hello Vanessa! I met you way back in the '80s at the Folklore Center (where Eddie had a repair concession)and played the song Vanessa with him on one of the many nights we jammed into the wee hours. ('Those were the days, my friend'). I also met Stephen when he was a 'sprout' of around 14. He liked to tease your dad---because it was so easy. (I was tempted to wind him up myself sometimes LOL). I saw Stephen last the night of the last gig Eddie and I did at Smalls (June 18, 2016---almost a year to the day of Eddie's death). I had gotten Eddie an 80th birthday party at Smalls. Oscar Pettiford's son also showed up. A sketch artist, he drew the band of Eddie, John Beal, Taro Okamota and myself. Two sons of great men.

I'd be lying if I didn't say Eddie could be difficult---he admitted as much---and that night he was in rare form. We had a falling out over it, but I realized later what had set him off. It wasn't the musicians---and that's all I have to say.

Because we didn't end up with the great friendship we started with, I thought and soul-searched over: how do you make up with a dear friend who is gone? You DON'T---you can't. But one has to be an understanding and forgiving soul. Eddie and I were always high-strung and intense---comes with the artistic temperament territory.

I tend to follow my heart---sometimes on a fool's mission---but I had an unfinished record date in the can with Sheryl Bailey and myself on guitars. I finally got Ray Macchiarolla, a very swinging and soulful guitarist (Sheryl also plays her buns off), put one solo piece in, and was almost ready to call it a CD. One problem: what TO call it. After hearing the playback on the last date with Ray, I had the answer: Joel Fass and Friends Play For Eddie Diehl.

REMEMBERING EDDIE DIEHL (1936-2017): Eddie, a close friend for more than 40 years---and an important early mentor---was one of the great unsung (except for those in the know who 'sang' him) improvisers on any instrument and certainly unsung (but never 'unswung') jazz guitar greats. (FYI: Diehl was also a gifted visual artist and in-demand luthier/repairmeister).

Here's remembering a man with a heart at least as big as that nearly nonpareil talent, one who granted to one and all time, wisdom, humor, warmth and craziness. A Janus-faced personage, fascinating and brilliant, who could be ---well---many things (sometimes on the same day!)

And how did we feel about one another as friends/colleagues? Per a classic Ellington title: 'Love You Madly'.

Here's also to countless nights jammin' at the storied Folklore Center (W. 3rd and 6th, W. Village---where he had his repair concession). We'd have our 'fuel' and pile into standards, jazz standards, blues, etc. His pet name for me back then (earliest '80s): 'Sprank'---because I 'spranked' as many notes as I made. That was Eddie's way of saying that I, too, had heart. (I, in turn, dubbed him Greta Garbo, since---re the music biz, anyway---he 'vanted to be alone') Eddie heard what I was saying then (as he heard other young players) because---as he was wont to say of others, he had 'ears like Dumbo'.

Playing duet (especially) with Eddie, one experienced chorus after swinging, subtle, well-paced inventive chorus. Unlike too many lesser players, the more he played the more he heard. And he never got any louder than the music called for. Also, the partner got---well---'ears like Dumbo', as he went beyond bland accompaniment to suggestion (handing the baton to the other player) then underlining (once said player was into his own 'safari'). Best for last, the exchanges: 4s, 8s---whatever---were so damn much fun, even as he kept you on your toes.

An American Original has gone to join the ancestors.

Kudos are also due---and in a big way---to Ray and Sheryl for playing these duets with such creativity, fire, 'loud listening' and swing. I daresay Eddie would be proud of them. I know I am. (I also aver that we all stand on the shoulders of the man responsible for us jazz guitarists: Charlie Christian).

(And thanks, as always, to Alisa Hafkin and Melanie Mashburn of the Jazz Foundation of America for their love and financial/spiritual support. Couldn't of done it without yiz, gals! DCitto the Jazz Bridge of Philadelphia. For info/donations please go to:

Bobby Lenti, my friend since 1968 back in 'Canahhhsie', in that self-same year would often ask me 'What's the matter, Joel?' Now, in December, 2017, I'm still doping out the answer to that one---and bless Bobby for still asking it (in this case, from the studio controls---where he once again proved his extraordinary expertise and patience.)

OK, enough 'chin music' from this wag. On to the actual stuff.

His obituary can be read at the Joseph J. Darrow, Jr. Funeral Home in Poughkeepsie NY. http://www.darrowfuneralhome.org/obits/obituary.php?id=695349