One of my lasting childhood memories, is that of staying home from school when I was sick. I would typically stay in bed through the morning, sleeping off whatever bug I had. Some time close to Noon, I would gather my blankets and migrate to the couch. It was there I would spend the next few hours, sipping 7 UP, eating soup, and watching The Twilight Zone. The television station was KTLA, a local Los Angeles area station owned by the singing cowboy Gene Autry from 1964 through 1995 (the station was also home to Autry's professional baseball team the California Angels, who were our team in those suburban days). If memory serves me correct, The Twilight Zone was aired weekdays at Noon - possibly with 2 episodes back-to-back, obviously well into syndication as this was the late-1970s and early-1980s. Between this and KTLA's annual Fourth of July Twilight Zone marathon, it was ensured that I saw nearly all 156 of the original episodes at least a couple of times. So it was with these memories at the back of my mind that I embarked upon the first season of The Twilight Zone last month when I had the flu. 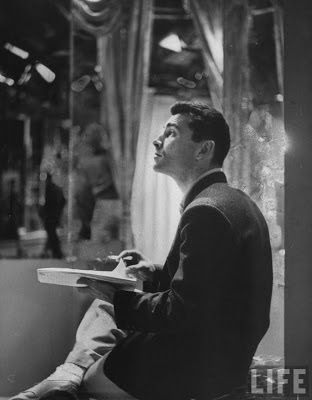 The first season of the original series ran from October 1959 through July 1960 on CBS in the USA. It was shown on Fridays at 10:00 PM Eastern Time. All of the episodes of the first season had a running time of just under 30 minutes. According to this exhaustive listing, the first 36 episodes were pre-empted 3 times and 2 reruns were shown before its inaugural run was complete. It was, of course, the brainchild of a very peculiar figure in television history: Rod Serling. Serling, who turned 35 during the first season, had already won 3 Emmy awards for his screenwriting efforts before the series debuted. The series would earn him his fourth. Serling, who had fought for the U.S. Army and earned a Purple Heart during the Second World War in the Philippines, had his fair share of conflict with both sponsors and censors in his early television career as he was not shy about tackling controversial social and political issues. At the time in a televised interview with Mike Wallace, he called The Twilight Zone the culmination of 12 years work. Perhaps most important was Serling's attitude towards the serial. In the same interview with Wallace he referred to the episodes as "adult...extremely polished films." He was also quick to categorize them as a mix of fantasy, imagination, and science fiction. In short, it was a very serious view of the burgeoning entertainment medium and one that set him apart from many of his contemporaries.


Seeing these early episodes again, thirty years since I first experienced them, I was not only pleasantly surprised by the longevity of writing but enjoyed discovering the many Mid-century modern Easter eggs that I know understand helped shaped my young consciousness. The overall mood and style is still arresting. If modern jazz captured the psychosis of post-war years in sound (as has often been argued), I can think of no single television program that managed to do the same on dramatic terms. There is an over-arching anxiety the permeates every episode. Not the manufactured fright of the Red Scare, but the rather palatable fear of modern life in the shadow of the mushroom cloud. There is the anxiety that society is not what it thought it was. And there is the dissolution of the American Dream, an idea upon which the counterculture of the late-1960s would hinge itself. Sure, not every episode hits the mark, particularly over the course of the first few months over which principle writer Serling finds his footing. But when it is good it is good in a way the resonates in a manner of the some of the best art of our time. Did television ever really get any better? 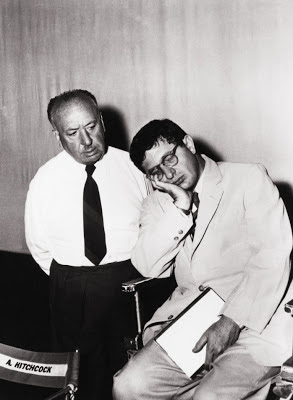 Alfred Hitchcock and Bernard Hermann on the set of Psycho, c.1959-1960

For us Moderns, there are treats at every turn. The original theme music, used throughout the first season, was composed by no less than the maestro of suspense himself Bernard Hermann. Hermann was quite well known by this time having recently scored Alfred Hitchcock's Vertigo. In fact, he was working concurrently on the score for Psycho at the same time as he scored some of The Twilight Zone  episodes (which he did in addition to the main title) and there are some stylistic similarities between the two ventures at times. It's a moody piece, not quite as aggressively avant garde as the theme written by Marius Constant for the second season (widely known to most as the theme to the series) and played by jazz great Howard Roberts on his Fender Telecaster electric guitar. The opening titles to the first season were created by the mad genius animators over at UPA and clearly echo the abstract feel of some of their more well-known work, particularly in the realm of children's animations. In fact, one of the cool things about the show is it's clear New York - Los Angeles axis, something not always evident in productions during this era. There is a definite New York feel to much of the show's content and story lines. But much of the production was done in and around Los Angeles (Serling himself remained a New York resident for quite some time). And of course, there are the many wonderful actors and directors who make their appearances at all points of their career junctures. It is simply amazing how many familiar faces grace the small screen over the course of the 18 hours of footage from the first season alone. But rather than bore you with a laundry list of names, I will just remark how surprised and pleased I was to see jazz and fashion photographer William Claxton's name appear onscreen as the director of The Last Flight (episode 18, February 5, 1960).


In parting, above is the Mike Wallace September 22, 1959 television interview that I referenced earlier in today's weblog. Clocking in at just over 20 minutes, it provides great context to this cornerstone of popular American culture at it's birth.
Posted by Nick Rossi at 5:07 PM

Excellent article! Such a fantastic show with great writing after all these years.

That's funny. I dipped my toes into the first episode of "AHP", but didn't want to go down that rabbit hole. Soon, I am sure! Thanks for the kind words.

so many great episodes...

Interesting. I don't know anything about this. I will dig deeper. Thanks for the comments.

one of my fave guitarists,
highly influenced by tz and soundtrack


and of course garcia did the theme on the remake