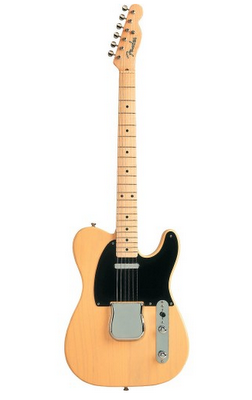 To say much has been written about the Fender Telecaster, would indeed be an understatement. Officially introduced in 1951 by Leo Fender's then small Los Angeles County-based musical instrument operation, it arguably the most-popular electric guitar ever, transcending genres and generations. There are plenty of excellent online resources from a musician's and guitar geek's perspective, including a message forum dedicated entirely to the guitar. But what interests me most from the perspective of this weblog is the Fender Telecaster as an icon of modern California design. 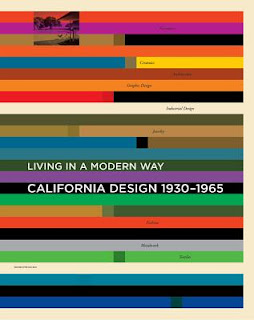 A few weeks ago, I caught the tail-end of the LACMA's California Design, 1930-1965 "Living in a Modern Way". It was an excellent exhibit that did a great job of not only presenting the classics, but also making a good case for the zeitgeist modern California design. For example, just a few feet from an amazing recreation of the living room of Charles and Ray Eames was a pair of surfboards designed by Hobart "Hobie" Alter and Greg Noll. This sparked an interesting conversation between my brother and I about the validity of presenting two disparate design pieces that socially, if not culturally, may or may not have little to do with one another. It also successfully got my brain thinking more about how cultural trends did influence various industries. And this, in turn, got me to thinking a bit more about Leo Fender's Telecaster. 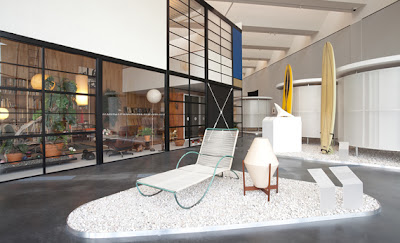 While conspicuously absent in the LACMA exhibit, the first commercially successful solid-body electric Spanish or standard (as opposed to Hawaiian or lap steel) guitar meets much of the criteria of California modernism. It can trace it's design heritage back to 1948 with the first prototype being produced in 1949. Leo Fender had a small operation at the time based in Santa Ana, California (40 miles West of the Eames home in the Pacific Palisades and the Coast). The big band era was in its last few bars and small combos were becoming the new economic reality in modern jazz, rhythm and blues, and western swing music. As the standard guitar gained became more prevalent as a front-line instrument (not just a part of the rhythm section), so the need arose for a cost-effective amplified instrument. Leo was keenly aware of this. 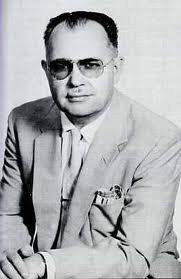 Fender's axiom was that this new guitar had to be cost-effective to both make and sell. It also had to be simple and easy to service. Furthermore it needed to address the musical concerns of being easy to play as a lead instrument and able to be amplified at loud volumes without causing the loud, offensive sound known as "feedback" - that howling sound everyone panics about that you've heard come from the PA system at street fairs. You know the sound. 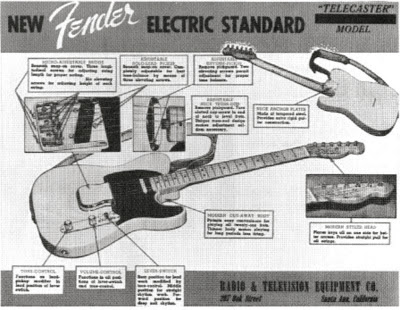 What follows next is a textbook example of "form follows function", the modern design principle introduced by Louis Sullivan at the end of the 19th Century. The guitar Fender created addressed all of those needs remarkably well and was soon available commercially for $189 (approximately $1,500 in today's dollars). This was an affordable, versatile tool that reflected the times and has since proven to be timeless. From a strict design perspective the Telecaster sits comfortably alongside the wooden Eames Lounge Chair (1946) and molded plastic Side Chair (1948), as well as the surfboard designs mentioned earlier. One could almost believe that they all came from the same design firm. Well, almost. Fender was being self-consciously modern to some extent. He did desire to break from the traditional guitar shape, again very much following the functional needs of the burgeoning lead guitarist. Early advertising was very much aware of this and, in fact, used the term "modern" freely. 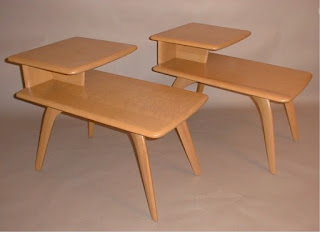 Lines and shapes aside, the color and finish was meant to emulate contemporary "blonde" furniture, still a relatively new trend in the early-1950s. More than any other single firm, this was popularized by Massachusetts-based Heywood-Wakefield starting with their mid-1930s "Modern Series", itself influenced heavily by European (primarily French) Deco designs and styles. The look was particularly popular in affluent Southern California and did reflect some degree of the aspiration of the time. Long-before collectors started talking about butterscotch finishes, Fender Telecasters were blondes. 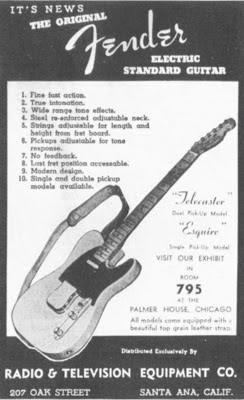 After a rocky start which saw 2 name changes, some minor legal squabbles, and a bit of tweaking; the Fender Telecaster as we pretty much know it today was available for purchase in local music stores in 1951. Fender was smart in that he got it the hands of everyone from Jimmy Bryant to Les Paul to Barney Kessel. Not only did it become tremendously popular with the working-class western swing and country bands playing throughout the State, but with the rise of rock & roll, it became standard Hollywood studio issue. By the end of the decade it was everywhere, from TV (NBC's legendary Peter Gunn theme featuring Bob Bain) to radio (James Burton on nearly every Ricky Nelson hit from 1958 onwards to name just one player) and beyond. 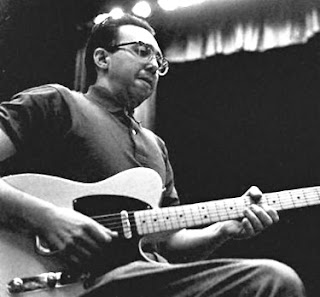 Was Leo Fender a modernist? Of course, although I doubt very highly he thought of himself as such or even would care about being mentioned in the same breath as Charles Eames. As proud of his achievements as he was over the years, I am sure he thought of himself as a pragmatist first and foremost. But for our discussion's sake, he was a modern man, to be sure.

Postscript - Although Fender sold the company a long time ago, you can still buy a brand new made in California Fender Telecaster today which has truly changed very little in the past 61 years.
Posted by Nick Rossi at 7:07 AM

Are Rickenbacker guitars too postmodern?

Too post-modern? Oh, I don't think so. A different design aesthetic perhaps, with distinct European eye. If anything, I think they were one of the few attempts to further modernize the hollow-body guitar. The other being Gibson's earlier L-5 archtop, of course. Thanks of the comment.

Probably the Rickenbacker’s SOUND respond to the needs of a post-modern imaginary…
But the fender DESIGN, expecially 1951’s Fender, is simple and beautiful at the same time, still extraordinarily evocative.
Thanks for this great blog.