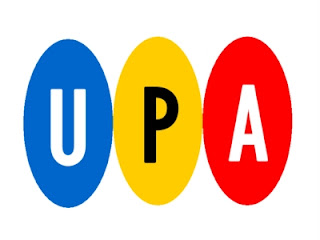 Among the cartoon cognoscenti, UPA is a legend. Formed in 1944, United Productions of America developed very quickly into THE postwar progressive animation studio. It reached its zenith within a few short years of its existence and almost as quickly it dissipated due to internal conflicts and external pressures. Regardless, it left a legacy which continues to heavily influence animators as it has since the early-1950s. Its long and storied history has been well documented online, this link as well as this one being two good places to start for some of the details. 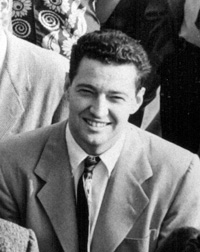 One can make a rather strong argument that the heart and soul of early UPA was John Hubley. Having paid his dues over at Disney over the course of 10 years, Hubley left after the labor disputes of 1941. While at Disney he worked mainly on backgrounds, perhaps most notably (for the purposes of this particular weblog) on the animation of Igor Stravinsky's "The Rite of Spring" (1913) for the Fantasia feature length film in 1940. Not only did this segment receive the approval of the composer himself who visited the animators studio during production, but it also represented some of the most avant grade work that Disney's animators produced - certainly up until that time. Setting aside the fact that Disney and Stokowski took GREAT liberties with the piece, it is a remarkable achievement - not to mention my first exposure to Stravinsky.

Another visitor to the Disney studios was architect Frank Lloyd Wright in 1939. In a move that is not at all surprising, the maestro brought along a 1934 film by Russian/Soviet animator Ivan Ivanov-Vano that he felt the Disney talent should be aware of. The Tale of Czar Durondai would be very influential indeed, especially on Hubley and another progressive animator with pro-union and genuine communist interests, David Hilberman. Sadly, the aforementioned film seems MIA online, but here is Ivanov-Vano's 1933 Black and White which gives you an indication of his animation style at the time.

After the Disney strike of '41 and the studio's subsequent settlement with the Screen Cartoonists Guild, Hilberman was one of the first to leave Walt's behemoth. Along with several other like-minded Disney refugees he started Industrial Film & Poster Service in 1943. With the Second World War not yet over and the Soviet Union still an ally their progressive politics, hopeful ideals, and attendance at US Communist Party meetings was not yet considered "anti-American". In fact by the time Hudley joined the organization and it was renamed United Productions of America in 1944, much of its work was for US Government-sponsored animated shorts (propaganda by any other name). However this ground to a halt at the conclusion of the war, when the most famous Red Scare in American history started seeping into the political and social landscape. In short, Hilberman was "named" (by Disney, no less) which successfully ended UPA's lucrative government work and forced them into the theatrical animation business.

The forced move resulted in some of the most innovative animation to date as well as some of the most influential animation every created. Their success was not only critical, but popular as well, receiving academy awards for both 1949's "The Ragtime Bear" (featuring Hubley's most well-known creation, a caricature of a McCarthy-ite named Mr. Magoo) as well as 1950's "Gerald McBoing-Boing" (based on a story by Dr. Seuss).

1951's "Rooty Toot Toot" was an even further visual and musical innovation. Visually, the animated short's closest kin were the contemporaneous album covers drawn by David Stone Martin for Mercury and Clef Records. The music (by noted bandleader Phil Moore) was a mix of jazz, blues, and modern classical and took the advances of the Stravinsky Fantasia segment a step further and firmly into the post-war mid-century world. The voices include the legendary Thurl Ravenscroft and Annette Warren. While the latter also served as a singing stand-in for both Lucille Ball and Ava Gardner around this time, the former's voice is well known to anyone that has every been to Disneyland, watched and old Kellogg's Corn Flakes commercial (that features Tony The Tiger, that is), or has sung-along with 1966's "Your a Mean One, Mr. Grinch". On top of it all, the subject matter is very adult and quite serious - albeit handled in a playful manner only possible through animation. It's a retelling of the 19th Century Frankie and Johnny folk legend, popularized by everyone from Mississippi John Hurt to Sam Cooke. The short was again nominated for an Oscar, but failed to repeat the success of its predecessors. 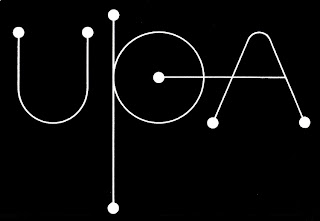 "Rooty Toot Toot" was a visual reflection of much of what UPA was about at the time. Alvin Lustig had designed UPA's initial 1940s logo as well as their 1950 re-branding which is now instantly recognizable and somewhat iconic. Both designs represent the modernist aesthetic at its finest. John Lautner, the father of Googie Architecture and a student of Frank Lloyd Wright, designed the UPA Burbank studio in 1949 around the same time he designed West Hollywood's landmark Googie's coffee shop. And there was a strong contingent of modern jazz fans among the UPA ranks, Hubley in particular. Chico Hamilton reportedly even contributed to a later episode of Gerald McBoing-Boing. Even in subject matter, the cartoon reflected something of the egalitarian atmosphere cultivated by the principals of UPA, with no small degree of ambiguous morality.

Here, without further ado, is the film in question...

Unfortunately, UPA crumbled soon after the release of the above short. Hilberman had left early on for NYC, his own firm and mostly advertising shorts before briefly leaving the country and then settling in the San Francisco-Bay Area where he taught at San Francisco State University for a number of years. The increasingly threatening activities of the House Committee on Un-American Actitivies forced many either out of the business or at least temporarily out of Hollywood. Hubley was summoned and refused to name names. By 1952 he was out of UPA, working out of LA for another 3 years, before moving to New York. He continued to work in independent animation until his death in 1977. UPA has continued to operate over the years but is a pale reflection of its former self.

For further reading and insight into some of the ideas behind UPA in its original incarnation, I do recommend this 1980 article on Dave Hilberman.

In 1983, Walt Disney's nephew, Roy Disney, purchased the Lautner-designed UPA building in Burbank, California. He offered significant financial incentives to the occupants at the time to move out immediately. He then completely razed the building. All that survives of the era in the area is The Smoke House restaurant next door built in 1949 and frequented by the UPAers over the years both for their hamburgers and booze. Next time you are in that part of the world, stop in and raise a glass for Hubley, Hilbermann, and Mr. Magoo.

This might just be my favorite A Modernist post thus far, as I'm a HUGE animation fan and UPA is definitely one of the best studios that was around.

A couple of weeks ago, I purchased the UPA DVD collection off the TCM website, but haven't delved into it quite yet. Over the holidays, I received the Woody Woodpecker set and I believe that set has one of my all-time favorite cartoons: Sh-h-h-h! http://www.youtube.com/watch?v=9w0QoQX48kw

Also, 2 books to explore: 'Cartoon Modern' and 'When McGoo Flew: The Rise and Fall of Animation Studio UPA' which was just released this year and I've yet to pick up.

Really great work on this post and so many great names associated with this studio! Perfect mixes of sounds and visuals.

Okay, one last thing to bring up: check out Norman McLaren and his mid-century Canadian animation pieces.

(See, I'm not all just about parkas and 3-button suits!)

Thanks, I appreciate the comments and recommendations. Both of those books have been added to my list. Plus, as I said, there is just a TON of great online information about this topic during this entire time period. I had not seen that Walter Lantz-Tex Avery cartoon you linked to in years. Again, so much of my youth was filled with these animated shorts in syndication, it's easy to see why they are of such interest to me.