Sonata for Flute, Viola, and Harp by Claude Debussy (1915) 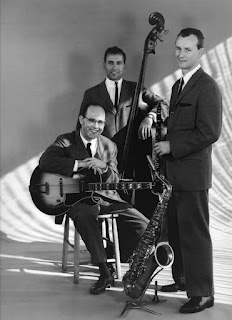 The Jimmy Giuffre 3 photographed by William Claxton, an alternate shot of what was used on his first Atlantic LP

I've only recently (read as: last week) learned that Memorial Day here in the United States is also known as the unofficial start of Summer. Equinoxes aside, I guess I can accept this as it does make a certain amount sense. But what that means to me is not that I can start wearing white again, but rather that it is time to dig out the debut LP by the Jimmy Giuffre 3 on Atlantic Records. Recorded over the course of 2 sessions at Capitol Records Studios (possibly the Tower then in its first year of operation, but perhaps on December 3rd and 4th, 1956 in Los Angeles by reed player (and fellow Italian-American) Giuffre, Jim Hall (guitar) and Ralph Pena (bass), the LP gained its seasonal association for me due to my first exposure to "The Train and the River" as featured in Jazz on a Summer's Day (more on that one some other time). That aside, there is a warm breeze to the music that provides some aural hint of long sunny days. Something Los Angeles experiences more than many of us during the year perhaps, but at the very least there is vaguely something...well...Summery about the music.

For those of you who have not heard the original studio recording of the above mentioned classic, have a listen:

Every time I listen to this disc, I hear something more. Not only is it deep music but it swings like heck - even in the absence of a pianist or drummer. As I am want to do, I ended up spending a little time digging deeper into this topic. After retreading much of the same virtual ground online, I went to my bookshelf and reached for Ted Gioia's excellent West Coast Jazz: Modern Jazz in California, 1945-1960 from 1992. If you are a jazz head, dig those great West Coast sounds, and are looking to add to your Summer reading list, I cannot recommend this book enough. It's easily one of my favorite books written about jazz music. But (as usual) I digress. I recalled that Gioia devoted a chapter to Giuffre, which I re-read Monday morning. 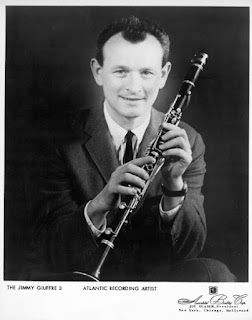 As well worn as my copy of West Coast Jazz is, it too is a work of art that always reveals a little something more every time I return to it. This time around concerned the origins Jimmy Giuffre 3. Giuffre is quoted by Gioia as having been inspired by Claude Debussy's Sonata for Flute, Viola, and Harp in putting together this particular combo with himself, Pena, and Hall in the respective flute, viola, and harp roles. Debussy! Of course the great French Romantic composer's name is familiar to those who have dug a little deeper into modern jazz, everyone from Duke Ellington to Gil Evans to Charlie Parker expressed admiration or showed some influence. But what is unique in this instance is how a single piece of music - and a piece of chamber music at that - influenced the concept of an entire combo, and across genres at that. 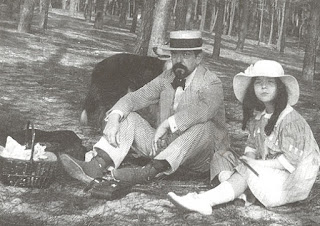 Debussy and his daughter near the end of his life (and her's) enjoying a picnic.

This particular piece is one of Debussy's later works: he would die of rectal cancer only 3 years after completing this sonata. As a composer and artist, Debussy is fascinating, not only for his music and for the time he emerged from, but for his deep appreciation of and influences by the visual arts. He was remarkably modern, employing musical devices that many of us still have not caught up with. Dissonance and whole-tone scales aside, he composed beautiful and challenging music which fortunately has experienced a fair amount of appreciation over the years and is accessible both via recorded works and usually wherever large symphony orchestras perform regularly.

I will in no way claim to be an expert on his music - I am a casual admirer - but I must say that it is one of his more interesting and appealing pieces. I've probably listened to it half a dozen times today and it, too, continues to reveal its layers with each subsequent listen. I suspect this will continue to be the case for years to come. But for now I am content with the perfect soundtrack for an early-Summer morning. Sit back, put on a pair of headphones, or stream this through your home hi-fi and enjoy!

check out the trio in rome 1959 on youtube...great

been playing the desmond hall quartet alot myself..hall had some run, chico hamilton, giuffre, desmond and art farmer..great all

Thanks for the comments. Don't forget Hall's brief association with Sonny Rollins in the early 1960s as well. He really did have an amazing stretch and remains one of the greatest of all time. I'm particularly fond of his "Jazz Guitar" LP on Pacific Jazz with the great John Altoon painting. Also, Gioia's book addresses Giuffre's relationship with LaViolette quite well. He is someone I need to dig deeper into.

makes one want a sadowsky!

Nice comparison. I wouldn't have thought about it. I fell in love with Giuffre's music after hearing the album Undercurrent by Jim Hall and Bill Evans. There's something pretty unique about his music. This sensation of time being suspended or stretched, something almost mystical sometimes. "Green country" on the album "Travlin' light" is one my favourite Giuffre's recordings. Like the subtle capture of a summer crepuscule.

Thanks for the comments. Truth be told, I own/play an early-50s Gibson ES-150 archtop with a P-90. A step down from the 175, but fairly close in terms of construction and sound. Your comments about Giuffre's music are very apt. Their is something quite mystical about his playing at times. It's worth reading a bit more about his "guru" LaViolette as mentioned earlier in the comments. It adds a lot of understanding to the depth of his playing.