The legacy of Alfred Hitchcock's Vertigo looms over the city of San Francisco - particularly for those of us with an interest in cinema, the 20th Century, and popular culture. For example just the other day this article ran in our local daily And, as you can see, there is no shortage of controversy over a seemingly simple matter - a facade that was preserved on celluloid for a mere few seconds. And yet, it manages to rile emotions to rival any other issue at hand. So what with that and Sascha Gervasi's Hitchcock opening in select theaters this Friday, I thought I would take another look at Hitch. More specifically, let's take another look at the opening title sequence credited to the great modern designer Saul Bass.


It's an impressive piece of film. Here is the sequence in stills, courtesy of Christian Annyas. The visual brilliance of Bass is married perfectly to the musical brilliance of Bernard Hermann. 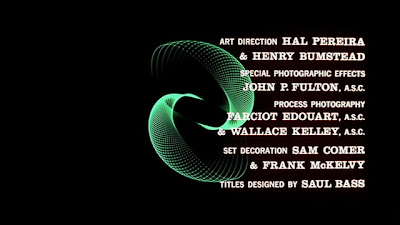 Or at least it is credited to Saul Bass.

One rabbit hole I recently went down led me to the Vortex concerts that took place here in San Francisco in 1957. While the concerts certainly deserve an entry of their own, in short the concerts took place at the Morrison Planetarium in Golden Gate Park, sponsored by KPFA and the California Academy of Sciences. The concerts were put together by Henry Jacobs, who I know of through his side-splittingly hip disc, The Wide Weird World of Shorty Petterstein on World Pacific Records (1958). I had re-listened to the disc on the way to a gig recently, when my interest in Jacobs was rekindled and I spent some time following what online leads there were on him.

A Chicago-native, Jacobs moved to SF in 1953. He was part sound collagist, part comic, and all hipster (in the best sense of the word). His "spoken word" recordings really deserve repeat listenings as they truly get funnier and funnier. His musique concrete works are admittedly over my head a bit, but still of interest. It is with the latter that he collaborated with visual artist Jordan Belson on the Vortex concerts. Jacobs was intrigued by the Planetarium's surround-sound which consisted of 38 speakers positioned throughout the auditorium. He saw the potential in such a system for musical performance and the visual aspect was a natural partnership. It was a successful happening and performances continued throughout 1959 (including a 1958 appearance at the World's Fair in Brussels). Folkways Records released a compilation of some of the music and remains in print. By all accounts, the performances were innovative precursors to the sound and light shows rock music would adopt in the late-1960s (not to mention "laserium" shows decades later). 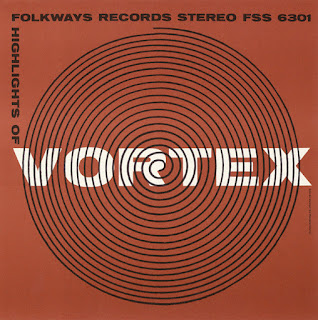 During the run of the Vortex series, Jacobs and Belson drew from the talents of several additional artists. On the musical side this included Bill Loughborough, whose shortlist of accomplishments included co-writing "Better Than Anything" (popularized by the great Bob Dorough) with room-mate and Kingston Trio bass player David "Buck" Wheat and playing percussion for Chet Baker's combo for several years in the mid-1950s. The group of contributing visual artists included two Southern California-born brothers named John and James Whitney. 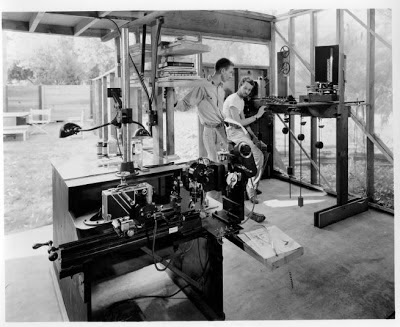 Both brothers were experimental film-makers whose abstract visual collaborations stretched back to 1939. John was born in Pasadena, California and went to college at the nearby Pomona College in Claremont (which among other things is where I wasted away a good portion of my high school years over copious amounts of Earl Grey tea!). Upon graduation he spent a year in Paris studying music with René Leibowitz. Liebowitz in turn had studied with both Maurice Ravel and Arnold Schoenberg and instructed Whitney in the latter's 12-tone system of music. But upon his return to California, Whitney shifted his focus to the visual arts often in partnership with his brother.

The imagery was linked back to music, certainly in the artists minds, but later more explicitly in the soundtracks the brothers selected for each. Early films were analogue in a true sense of the word, with the images being manipulated by hand for the camera. In this, the brothers were very successful. They continued using this method for just over a dozen years and just about as many films. Both worked on their own projects in addition to their collaborations. John even did 3 films for UPA. But some time in the early-to-mid-1950's the brothers hit upon a notion of how to use machinery to better articulate their goals. Using surplus military parts, John constructed their first "computers" which they used to make their animated features. Several years later, John explained for a documentary team:

By now, I am pretty sure you can see where I am going. Well it turns out that one of John Whitney's side projects was a full-blown collaboration with the design firm of Saul Bass. The result of this collaboration? Why the title sequence to Vertigo of course! Several reliable sources confirm that the two produced the piece together, although Bass solely received the credit onscreen. What is perhaps most interesting when one takes another look at the sequence after ploughing through this weblog entry is how closely tied the titles are to the other work of the Whitneys. In fact, add Hermann's strikingly modern score and it is not a world away from what one may have experienced at the Morrison Planetarium in 1957 or 1958 at one of the Vortex concerts. And considering that Hitchcock was in San Francisco filming at that very time...well, let's just leave it there for now. A little suspense never hurt anyone and something tells me this is not the end of this story!

talk about music of the spheres!

another great post...that spins larger and larger and
stretches further and further, yet completely connected and synchronized....like the patterns themselves

Thank you very much. I am glad to read your appreciation. There is more to come!

Yes! I rewatched Vertigo for the first time in quite a while last night, and this led me to Google "Saul Bass" and "Whitney", which led here. I knew that wasn't pure Bass, as great as he was. Thanks for this piece.