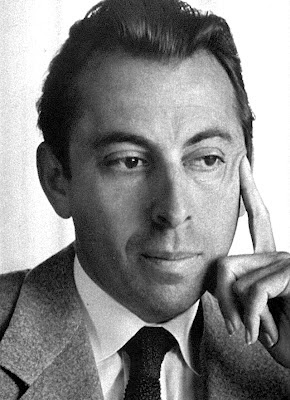 In a previous weblog entry, I quoted Charles Eames in saying "Eventually, everything connects." The concept is a favorite of mine and if you are a regular reader here, you will have seen that I often have been able to weave my various interests into the some sort of over-arching narrative. Today's entry is no exception, but designer Alvin Lustig makes such pursuits easy. Over the course of his brief 40 years on this planet, he was involved with books, magazines, interiors, architecture, furniture, industrial design, and company branding/identity. Born in Denver, Colorado he spent much of his early career in Los Angeles (with the exception of a brief spell as a student of Frank Lloyd Wright at Taliesin) before moving to New York City at age 29 to work as the Director of Visual Research for Look magazine, then in its ascension. A year later he began teaching. By the end of 1946 he returned to Los Angeles and opened up his own studio where he tried to eek out a living until he was forced to move back to New York in 1951. As a result of diabetes, Lustig lost his sight in 1954 and he died a year later due to complications around that disease. 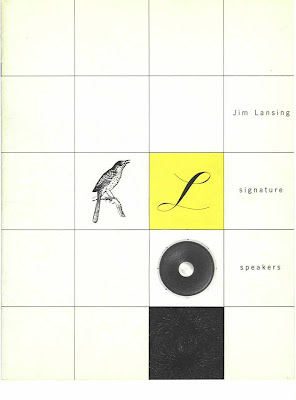 One of Lustig's clients during his second tenure in Los Angeles was the fledgling James B. Lansing Sound. The story of legendary amplified sound pioneer James Bullough Lansing (born James Martini, making him a suspected Italian-American. Cough.) is rather complicated, but in short he began to manufacture loudspeaker in LA in 1927 as the Lansing Manufacturing Company. After his business partner was killed in a plan crash, Lansing's company floundered was was purchased by Altec in 1941. Lansing was contracted with the company through 1946, but parted ways before that contract expired. James B. Lansing Sound, Inc. was founded in 1946, although Lansing again struggled to keep the company afloat and took his own life on his ranch in San Marcos, California just north of San Diego in the Autumn of 1949. Control of the company reverted to Vice President Bill Thomas who was able to parlay the company's sound innovations into a successful business. The company changed it's brand name to JBL in 1955 to settle its ongoing disputes with Altec Lansing. Fast forward fifty-seven years later and the name JBL is known the world-over. 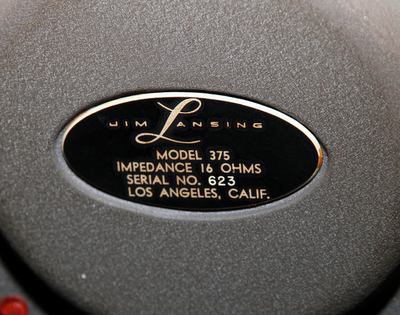 As part of this chaotic transition, Thomas and James Lansing Sound, Inc. engaged Lustig to assist them with re-branding their company. Unfortunately, there is very little documented information about when Lustig was contracted for the work, but one may assume that it may very well have happened after Lansing's death. Similarly, little is known about the depth of his engagement and how much it increased in scope after his association. What is known, is that by mid-1950 Lustig had overhauled the company's brand identity. That year's brochure was a beautiful example of postwar California modernist graphic design and is a unique item in Lustig's portfolio. It also introduced a logo hallmark (the "Jim Lansing" sans serif font contrasted with the "L" script) that would grace most of Lansing's speakers through the 1955. 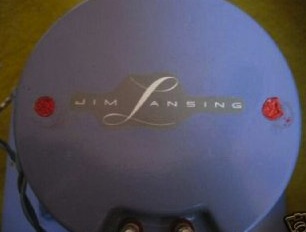 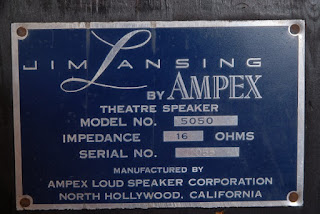 In additional to the graphic design work, Lustig's scope of services included design consulting with their speaker enclosures, namely the C34 through C39 series. Again, details are illusive in terms of his exact contributions and the Internet is teeming with vintage-JBL enthusiasts who are more than happy to share their knowledge and educated guesses. But after taking one look at the speaker enclosures from this time period, it is easy to speculate about Lustig's input. 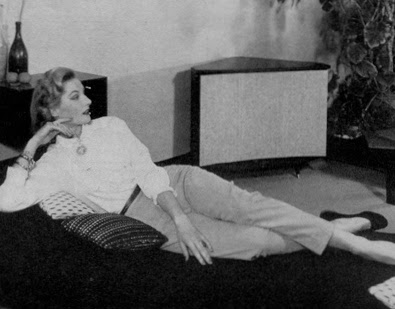 Lustig's association with the soon-to-be-JBL was obviously brief. The company introduced very little to  it's branding until the mid-1950s transition and Lustig's move to New York, followed by his death meant that there was little future for the partnership. What he did do is very successfully transition the branding of the company to something very cutting-edge and modern: a graphic representation of the products the company was becoming known for. By mid-decade, JBL was being mentioned in Life magazine and the rest, as it's been said, is history. 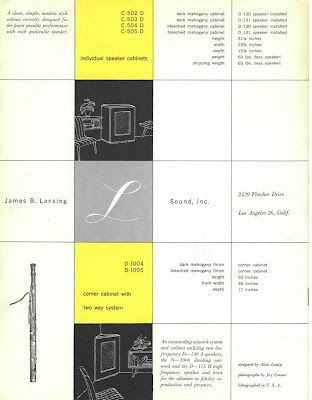