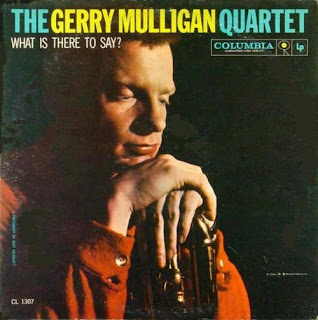 One of my favorite Gerry Mulligan LPs is What is There to Say? released by Columbia in 1959. Recorded over 3 sessions in December 1958 and 1 in January of 1959 at Columbia's famed 30th Street Studios in New York City, it manages simultaneous subtlety and a strong undercurrent of swing. Plus the fidelity of the recording is beautiful. To my ears, it's the realization of what Mulligan set out to accomplish with his piano-less quartet back in LA at the beginning of the decade with trumpeter Chet Baker and drummer Chico Hamilton. I personally prefer Art Farmer to Baker. Art has that West Coast tone - a compliment and a reflection of Farmer's 10+ years in LA playing alongside such wonderful musicians as Wardell Gray and Hampton Hawes - and lyricism but more chops than Chet. I do miss Chico, but that is no reflection on David Bailey - I just love Chico. Underneath is all is the great Bill Crow on bass. 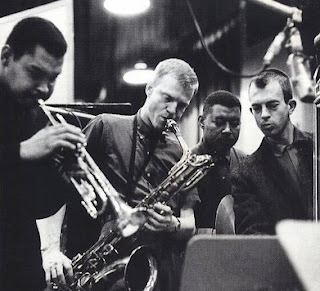 Art Farmer, Gerry Mulligan, Dave Bailey, and Bill Crow recording What is There to Say?

This particular line-up was a gigging combo who stayed intact for just over a year. In fact, the live debut of the group was in July 1958 at the Newport Jazz Festival, which I spent some time talking about a few weeks ago. Crow's association with Gerry does go much deeper than these 12 months as Jazz Profiles details with Crow here. And although I ran this clip in my aforementioned post above, let's take another look at the Mulligan Quartet at Newport on July 6, 1958.

"As Catch Can" by the Gerry Mulligan Quartet

Crow has a great online presence. Not only does he manage an excellent site full of photos and anecdotes, but he actively contributes to many of the discussions on various weblogs that have captured the interest of us jazz fans. Active on the New York scene since 1950, his discography alone is pretty staggering and reads like a who's who of post-war jazz in the United States. As a historian, he has made a major contribution via his essential Jazz Anecdotes (1991) oral history. And if that was not enough, he was the subject of one of the most iconic photographs in jazz. 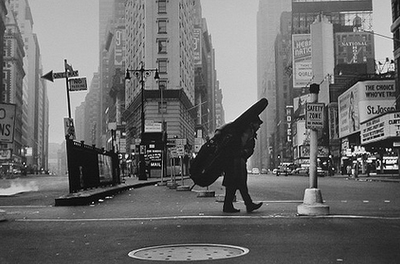 Crow was gracious enough with his time to answer a few questions for me about Chuck Wayne and "Solar" a couple of weeks ago. He then shifted his focus to my Jazz on Summer's Day profile pointing out a few things to me via email that I had either overlooked in my short piece or simply did not know!

With his permission, I thought I would share some of his comments:

You know, a lot of credit for Jazz on a Summer's Day should go to the guy Stern hired to shoot and edit that film for him: George Avakian's brother Aram. I knew him as Al. He was an experienced editor and cinematographer, and he and another cameraman shot the footage at Newport.

Indeed. In fact Aram Avakian is rightfully credited as co-director on the film. Before ...Summer's Day he had worked as an editor on Edward R. Murrow's "See It Now" television series and after worked with such directors as Francis Ford Coppola and Arthur Penn. He led an interesting life, graduating from Yale, serving in the Navy, living in Paris, and eventually becoming the chairman of the film studies program at State University New York, College of Purchase. Compared to Bert Stern's credits alone, one can see how essential Avakian was.

Crow continues, specifically about the footage shot for ...Summer's Day:

They were restricted to two camera locations specified by the Festival, so they were limited to panning and zooming at the concerts. They went up early and shot some local color, including the yacht races. But when it got dark, there was no lighting on the audience, so they couldn't get any reaction shots to the nighttime performers. Al's solution was to throw a party a week or so later, restricting the attendees to people who didn't perform at Newport. (My wife went without me.) Al showed the rough footage of the concert to the partygoers and filmed their reactions as though they were at Newport that night. With good editing, it came out just fine. 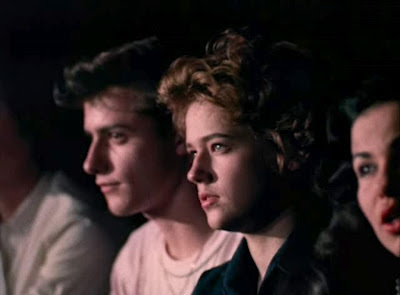 Now this is quite a revelation! I had previously read that at least one performance had to be re-filmed for the movie - specifically the Chico Hamilton Quintet segment - as they had some trouble with the lighting at night, but this is something that I had not seen documented elsewhere. Of course, it is going to take some of that old willing suspension of disbelief from now on but it is a fascinating component of this great musical document. It in no way diminishes the achievement of the film, but simply adds another dimension.

Thank you very much for your time Bill. I am honored to have you contribute to these pages.
Posted by Nick Rossi at 9:16 AM

As someone who was a member of the nighttime audience who never went to Newport I appreciated your observations and acclaim for Aram Avakian. His editing was fantastic, highly creative. 'though I was a friend of Bert Stern's, after so many years since it's release I watched it again and realized the editor's hand in making the movie the beauty to the eye and ear that it was.

Thank you for taking the time to leave a comment Linda.