Blue Sands by The Chico Hamilton Quintet from Bert Stern's Jazz on a Summer's Day, 1958

Social media delivered the news that Forestorn "Chico" Hamilton passed away at the age of 92. The words legend and great are far too often abused these days, but Hamilton was both. As an innovative percussionist and bandleader, he was a somewhat singular modern American musician. I know people that have both studied and worked with him, so I can comfortably claim that he was also a true personality. For those interested in digging deep, I highly recommend listening to and reading his contribution to the Smithsonian Jazz Oral History Project here. 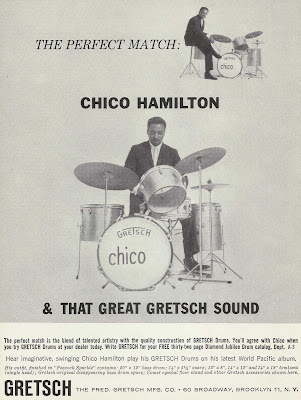 Regular readers will no doubt be well aware of my love of (and possible obsession with) Bert Stern's 1958 film Jazz on a Summer's Day. It has managed to work it's way onto these pages several times, but most notably here and here. Bassist Bill Crow also was kind enough to answer some of my related questions here. 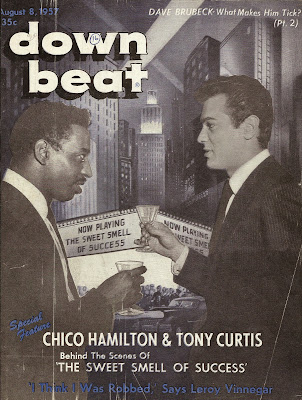 I have never really tackled the Quintet's performance of Buddy Collette's Blue Sands in print, mainly because - to me - it comes close to what many people call sacred music. More so than Mahalia Jackson's unquestionably moving spiritual in the film, Chico's appearance possesses a quality that transcends both genre and time. Deeply influential upon me too was the visual impact to the impeccably dressed quintet -which also featured at the time Collette's protege Eric Dolphy on flute and Italian-American guitarist John(ny) Pisano. To find out years later that the performance was filmed in front of an empty venue after the festival had completed for the evening due to a technical issue with the shoot made the power of the music all that more miraculous. Add to this his contributions to one of my other favorite films of all time (and something that I need to devote some more virtual ink to very soon), 1957's Sweet Smell of Success, and…well…almost needless to say, I am more than a little saddened to read of his passing in spite of his living a long, rich life.

not to mention collete, dolphy, horn

Those 1950s-1960s are pretty amazing when one looks back upon the personnel. Challenging, interesting, and swinging - all without testing ones ears to the limits of listenability. Other little gems include Chico's appearances during this era (along with most of his Quintet) on Tony Bennett's "Beat of My Heart" LP and those Ken Nordine 'Word Jazz' discs.

and he's also all over some early corman films like little shop of horrors, bucket of blood and creature from the haunted sea…although credited to the equally great cellist-fred katz…they are played by the quintet

in fact paul horn makes a cameo in bucket…