At the beginning of the summer, mention was made of USA-based McGregor Sportswear's introduction of the continental style into its product line. As I promised some further details on the matter, let's take another look now. 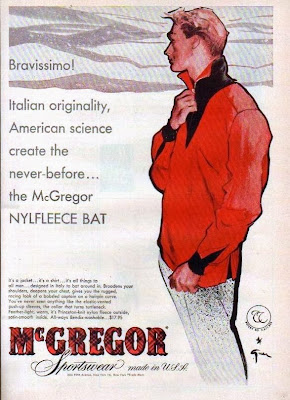 McGregor's roots reach back to New York, 1921 and Scottish immigrant David Doniger's establishment of a men's clothier. Doniger introduced the McGregor brand 2 years later and by mid-century was arguably the most well-known purveyor of what was be known as casual wear. Doniger was obviously just ahead of the curve. The concept of casual clothing did not really exist (much) before  the end of the Second World War. But with the wartime economy boom the reached through much of the 1940s and the cultural shift towards suburban pursuits, McGregor was positioned to take full advantage of the situation. 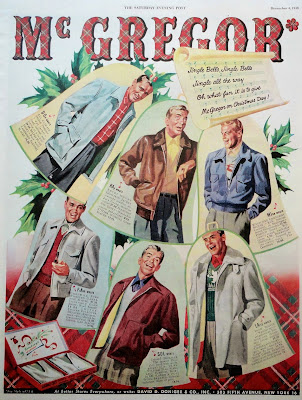 
By the mid-1950s, the brand was firmly established but began to feel the heat of competition as regional favorites such as Pendleton began to utilize the quickly-maturing advertising industry to increase its nationwide presence. McGregor had always specialized in imports as much of its early offerings were truly from Scotland, but to keep pace it looked even further afield to Italy and the en vogue continental look. In 1954, what would be called continental style was most commonly referred to as Italian style and McGregor referenced the latter liberally in its advertisements for its new line of distinctly international and modern casual wear. 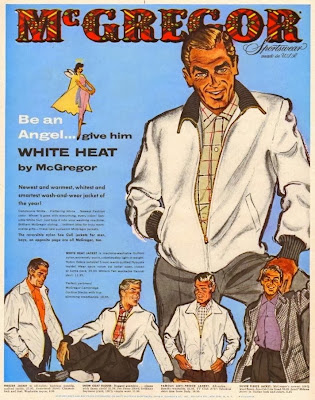 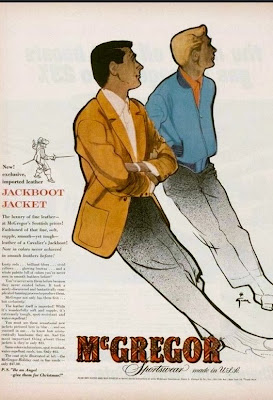 
To help sell this new look to a fairly staid and traditional market, McGregor (or most likely McGregor's advertising agency who I suspect, but cannot yet prove, was Y&R at the time) enlisted the services of one of the most talented fashion illustrators of the day, René Gruau. Italian-born Gruau, whose birth name was Renato Zavagli Ricciardelli delle Caminate, was 45 at the time his first print adverstisements for McGregor were published. He had only been living in New York for 9 years, having immigrated from Paris where he gained notoriety and no small amount of fame for his work with nearly every single important fashion magazine up until that time. A cursory look at his early work lends strong credence to the notion that his style completely changed the art of fashion illustration. And it certainly had a lasting impact on McGregor's approach to advertising. Gone were the flat, cartoon-like figures used early on (and still used by the competition at the time) to be replaced by impressionistic verging on abstract figures of intriguing looking gentlemen wearing garments with strange cuts and details. The Gruau commission was short-lived and only was run in magazines for a couple of years, but subsequent McGregor print ads unmistakably bore his influence. Mad Men could not have provided a better storyline! 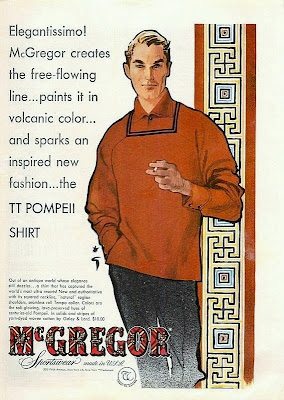 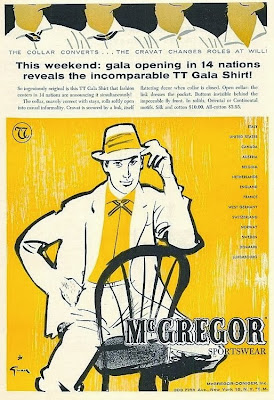 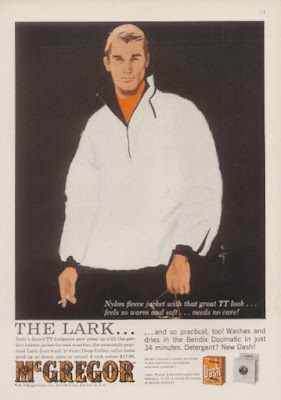 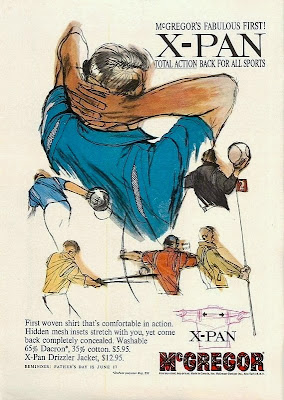