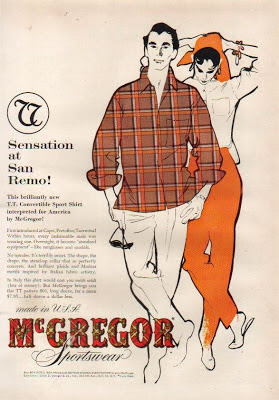 You may have noticed that one of the links I spotlight to the right of this column in the Blogroll is Shorpy. Their scope goes far beyond the somewhat narrow-minded confines of this particular space, so it is always refreshing to meander through their archives for glimpses of worlds other than this nebulous concept of modernism that I have. And yet, occasionally worlds do collide and, as I like to quote Charles Eames, eventually everything connects. Today's photo is a great example. 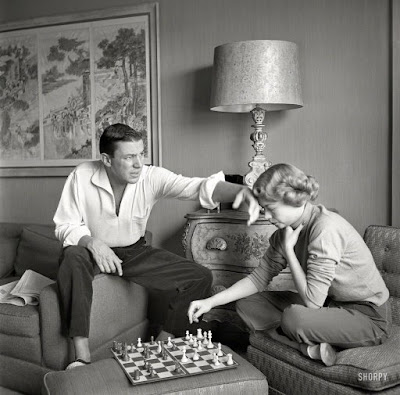 Be sure to click through here for the full size photo. It is certainly something to take in. The Mike Wallace of 1952 was a far cry from the Mike Wallace of today. He had already made the transition to television from radio, but was not yet known as an investigative journalist. In fact, he spent a good deal of time hosting game shows and serving as an announcer both for regular shows and commercial breaks. But one achievement worth noting was the groundbreaking TV talk show Mike and Buff that ran on CBS from 1951 until 1953 and was based in New York. His co-host was actress Buff Cobb who he married in 1949. According to Shorpy the photograph is from a 1952 spread for Look magazine with the intent of showing off Italian style. Interesting. 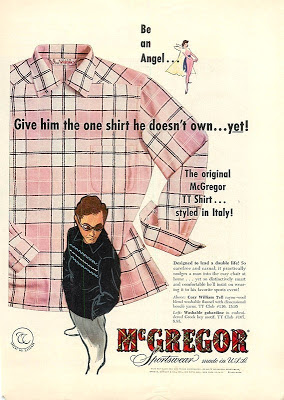 I wrote about the early origins of Continental (a.k.a. the Italian influence) style in the USA a few years ago on these very pages. However, what is interesting about the Wallace photo is that it predates by 2 years the general consensus about its emergence on these shores. This brought to mind some recent eBay finds of mine. A couple of print ads dated 1954 show McGregor Sportswear offering their original TT Shirt styled in Italy. Now those of you that know McGregor know that while they were a solid American brand, they could seldom be accused of being ahead of any fashion curves. So what got me scratching my head was how did McGregor jump on this trend so quickly? Perhaps they did not. Perhaps the stylistic developments of 1954 were much more of a gradual process that I had previously found. Well, it looks like someone needs to get back to their research. There is obviously a little more to story.
Posted by Nick Rossi at 4:01 PM