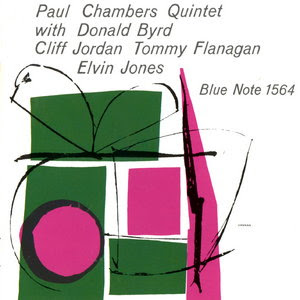 I've mused rhapsodic on these pages previously about the early design legacy of New York's Blue Note Records, focusing mainly on the 10-inch LP era and such artists as Bill Hughes, John Hermansader, and Gil Melle. Recently, I saw a Japanese reissue of an early 12-inch and was struck by the abstract art design of the sleeve. With a little knuckle-grease and 'net digging, I learned that the cover was the work of a slightly obscure and now deceased artist named Tom Hannan whose story has some very interesting modernist intersections. 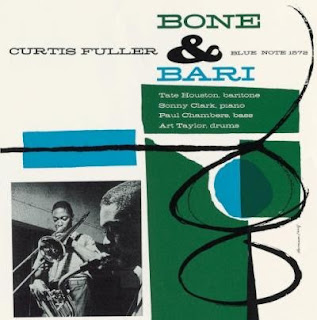 The Blue Note 1500 series of LPs reflect a time period (1955-1958) where the independent jazz record label was both in transition and starting to find its rhythm. These were the first releases in the new and soon to be dominant 12-inch format. Somewhere in the middle of the run (1562 to be exact) the discs started being released in both monaural and the popular new stereo format. It is when both the label and the medium came of age, if you will pardon the phrase. From a design perspective, it is during this series the Reid Miles began to come to prominence and by the end of the decade would be synonymous with the look of the label. 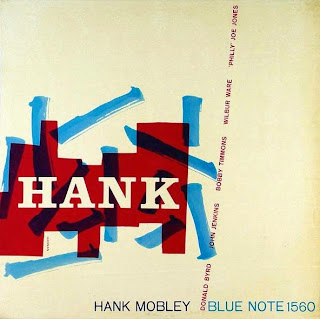 But Reid Miles had yet to establish his monopoly in 1957. Another artist, Tom Hannan, contributed several striking designs that mixed abstract imagery with striking typography. In some ways the balance of form and expression more accurately reflected the partially improvised music contained within the cardboard sleeves. At any rate, Hannan's contributions are definitely a glimpse of what could have been had Blue Note owners continued to experiment with a pool of designers throughout the end of the decade and into the 1960s. 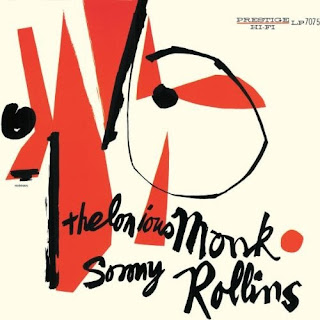 The Blue Note work was neither the first nor the last record jacket design work that Hannan did. The year prior he had contributed a number of excellent designs to the Prestige Records catalog and he continue to freelance through the end of the decade to a number of other labels. Taken as a whole, the LPs show a consistency in concept if not execution. Hannan's original abstract work was set against linear typography (another specialty of his) and often his own photography that was as sharp as a freshly pressed Brooks Brothers button-down shirt. 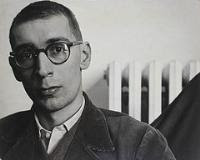 So what about the artist? Tom Hannan was born in Michigan in 1927. He was a jazz fan early on, spending some time playing the drums before shifting his focus on the visual arts. He attended both Wayne State University as well as the Cleveland School of Art before moving to New York in 1950 to attend the Hans Hofmann School on a painting scholarship. The Hans Hofmann? Yes indeed. Hofmann was one of more explicit links between early European abstract art and the New York School that most people know as abstract expressionism. Hannan not only studied with Hofmann, but ended up working as his assistant for 3 years until 1953. 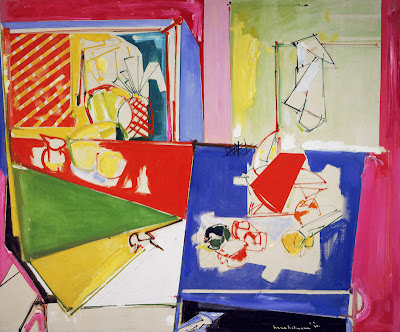 History has been kind to Hofmann and there is ample information both online and in books on this important icon, so I will stick to the salient points. Born in Germany in 1880, Hofmann was in Europe the moment art took an abrupt turn towards the abstract near the beginning of the 20th Century. He studied in Paris prior to World War I and taught two Summer courses in Berkeley, California (1930, 1931), before finally leaving Germany for good in 1933. His teaching career lasted nearly four decades and his more well known students included Frank Stella and Lee Krasner, to name but two. He continued to paint, teach, and write up until his death in 1966. 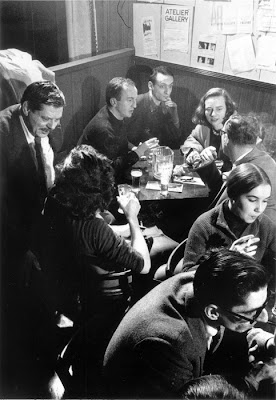 Back Table at the Five Spot, photo by Burt Glinn, 1957

Following his years with Hofmann, Hannan immediately began to make a name of his own. He was one of the founding members of the James Gallery, which opened up in the Fall of 1954 at 70 East 12th Street. The James Gallery was one of the artist-owned cooperative exhibition spaces that later came to be known as the 10th Street Galleries (something else that I have written about on these pages). The same year he married a Parson's School of Design student named Allison Smith and the two lived the almost stereotypical existence of 1950s New York artists: a cold-water flat in SoHo, jazz at The Five Spot, and commercial work such as those for Prestige and Blue Note to keep food on the table. Although initially a way to fund his more creative endeavors, Hannan eventually shifted his focus on graphic design in the 1960s. He and Allison eventually left the City for Vermont and became successful dealers in American furniture some time around 1970, a pursuit he continued until his death in 2000. 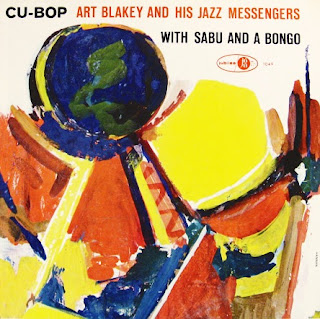 Cu-Bop, Art Blakey and his Jazz Messengers with Sabu and a Bongo, Jubilee Records 1049, 1958, design by Tom Hannan
Posted by Nick Rossi at 1:01 AM

He also illustrated the 1954 childrens book The Christmas Mother Goose .

When I met Tom in the late 1980's he had semi retired to Vermont and was living the life of a very discriminating antiques dealer specializing in early American country furniture and great folk art and pottery. I had a fledgling business selling antique nomadic and village oriental rugs and was also pursuing jazz sax and Tom was a drummer. We clicked and he ended up doing all the graphics for my company plus a killer three fold brochure for my new location in Dublin, NH around 1991. For the cover, he brought over a Mies van der Rohe chair for me to be photographed in, sitting outside on a large rug with the gallery in the background.