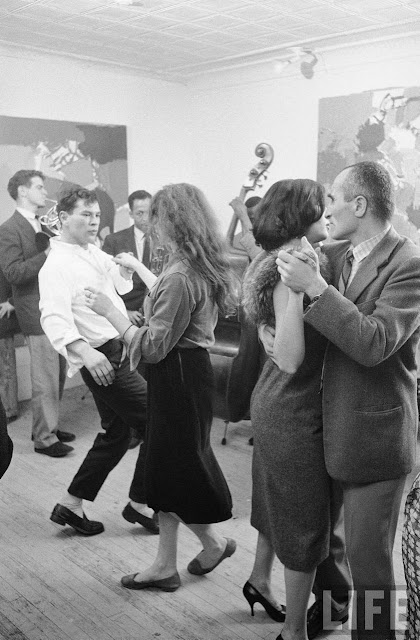 A few weeks ago, I came across the photo above on someone's Tumblr or Flickr or Friendster page. OK, it wasn't Friendster. After a little research I was able to confirm that it was photographed by James Burke for Life magazine some time in 1956. I say "some time" as I have found that the dates are not always accurate in the Life archives, so although it claims December of that year, let's not etch that in marble. OK? At first glance, there is SO much to just plain dig going on here: jazz musicians, abstract expressionist art, loafers, desert boots, and people just having a good time. I posted this shot on my Facebook wall which illicited some positive comments from like-minded souls the world over. It's just a neat encapsulation of why so many of us continue to dig deep into the past for inspiration. So let's dig a little deeper. 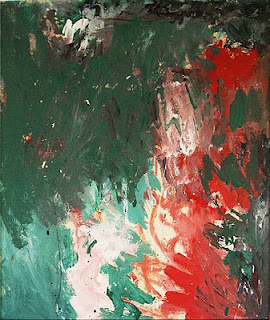 The main subject of the photo (at least in terms of the assignment Burke was on for Life) was artist Milton Resnick who can be seen dancing with the brunette in fur and heels to the far right of the photo. Resnick has a fascinating biography and in art historian circles is considered one of the major figures of Abstract Expressionism. Curiously, his posthumous popularity has sagged in recent years and he is seldom mentioned in the same breath as Pollock, de Kooning, or even (my personal favorite) Kline. But he was a big part of the 10th Street scene of the 1950s and 1960s. 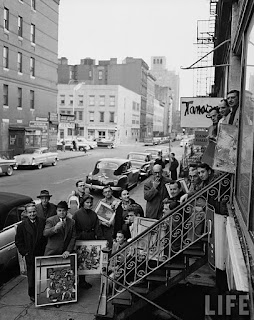 The 10th Street thing was a loose collaborative of artists and galleries located on the Lower East Side on and around East 10th Street in Manhattan. Some, like the Phoenix Gallery, still exist but for the most part they thrived from roughly 1952 to 1962. Live/work space was plentiful and rent was cheap, so many of the more progressive artists of the day gravitated to the locale and provided a significant alternative to the upmarket Midtown galleries. Long before SOMA. Long before Chelsea. Note: I wish I could identify more of the artists in the photo above. In addition to Resnick , the only one I am fairly sure of is Franz Kline (black hair and 'stache). If you recognize others, please leave a comment below! 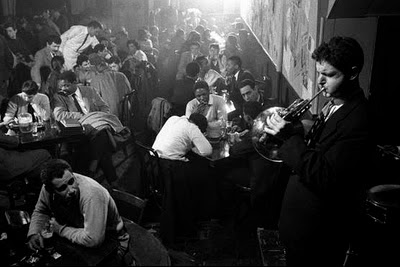 Back to the main photo. I am fairly confident that the man blowing the French horn is David Amram. Cast your peepers on the photo above shot a year later at the Five Spot Cafe (which is located just a few blocks South of E 10th in the Bowrey at 5 Cooper Square). Same guy, right? If you ain't hip to Amram, get hip. Not only did he have some serious Beat Generation ties back in the day, but he is still going strong in 2011 performing monthly at the Cornelia Street Cafe in Greenwich Village; a living link to the past. I'm only slightly going out on a limb when I say the remainder of the group performing at Resnick's house party is the Amram-Barrow Quartet. Tenor sax man George Barrow hooked up with Amram in 1955 by way of Charles Mingus. The group was rounded out by Arthur Phipps on bass and Al Harewood on drums. They were regulars at The Five Spot and recorded for Decca Records in 1956 or 1957. Of course, this all makes sense as The Five Spot was a favorite of the 10th Street crowd. 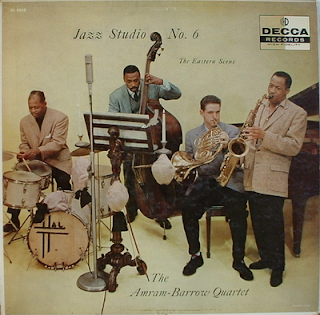 One final note of admiration regarding the photo. As I mentioned before, be sure to check out the clothes. It's such a cool mix of Bohemian, Ivy League, and contemporary fashion styles of the time. It's always eye-opening to see real candids from this time period (as opposed to movies or magazine ads, that is) to see how folks really dressed. Only Gerry Mulligan made wearing desert boots while blowing a horn look cooler!
Posted by Nick Rossi at 6:02 PM

The Amram-Barrow Quartet. David Amram, who
plays a rough-grained French horn, a dour, angular,
Monk-derived piano and, inexplicably, the tuben,
is well matched musically with George Barrow, a
tenor saxophonist with a strong, hard but flexible
tone which sometimes rises to a glowing cry. Most
of their voicings on Jazz. Studio No. 6, Decca 8558,
have a dry, dark quality which proves very effective
in blues-derived themes and the slow, moody de-
velopment of such popular tunes as Darn That
Dream. But it can trip them up, too, and when the
balance is not exactly right the effect turns stodgy.


as per artists
Theodoros Stamos is the key...he's on top the stairs front

Thanks for the kind words and the additional information. The photo and accompanying key is especially helpful.

On the stoop: Pat Passlof is in the center smiling and possibly looking at her husband, Resnick. Stamos is at the top, front. In the distance, oddly, with the baby carriage, are my mother and father, Ray and Marian Spillenger (2 people on the right). Since I was born in 1956, I can only assume that's me in the baby carriage. That is not Franz Kline with the black hair and mustache. Doesn't look like him at all. Interesting that the three women are clustered together. Is Grace Hartigan one of them?

Thanks Paul. Very pleased to have you share your insights and knowledge here. My mistake on Franz Kline. I've only seen a few photos of him and was obviously a little overconfident in my recognition abilities.

It ain't stamos. It's Al Kotin; Then I'd say Ipollito, Rosati partly blocking a glowering Resnick, Ludwig Sander sitting on steps, George Spaventa, Pat Passlof and Grace Hartigan.
In the photograph at the top Milton is dancing with Marisol.
James Burke, the Life photographer, shot these photos on a NYC layover on his way to cover developments in China. He died two weeks later accidentally falling off a cliff in the Himalayas.

Geoffrey, thank you VERY much for the additional comments; they are quite helpful and insightful. I had no idea that Burke died shortly after this session.