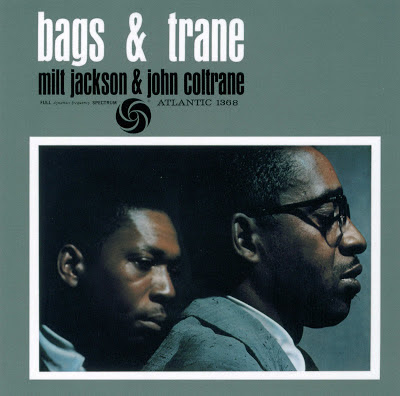 It'll always be Hip to me - Jimmy.

spooky.
i was playing this a the weekend.
anything with milt on is good.

i too have been listening to milt j rather heavily as of late...sessions with miles & particularly -the wizard of the vibes- collection...and mjq always..so

am just as taken with hutchersons later obliqueness,but bag's folksy (but never corny) style has been my constant recently

and i like what you write about the intertwining of memories and lp covers and family and clothes and style...

As ever, a great blog and a cracking guest blogger.

Thanks for the comments everyone. Sidenote: I thumbed through a copy of Friedlander's "American Musicians" the other day and there is an alternate photo of the cover. It is certainly worth a look.

He can be a very naughty boy Mr Frost Mellor but he's on to something here with this piece, for I too have long considered this one of the ultimate classics of mod jazz-ivy fusion. There's something about the way it's been recorded/produced/miked-up - Coltrane's sound is very big, warm and very close and immediate. Even crappy digital compression can't reduce its magnificence.

Thanks for the comments John. Although Neshui Ertegun produced the session, the recording engineer responsible for the sound of the disc is the great Tom Dowd, who was still cutting his teeth on jazz sessions in NYC at the time. I suspect it was recorded at their 57th Street address which was where they moved in 1956. They moved to a bigger studio on Broadway some time on 1959 and this session was recorded in January of that year. It was a fairly tiny room necessitating close-miking and not a lot of "room" sound, which partially explains the intimacy.