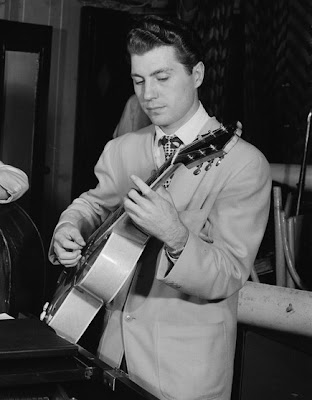 It's been a very exciting week for jazz historians. On Tuesday, July 3rd, Larry Appelbaum over at the Library of Congress posted a blog entry that presented for the first time aural evidence (and perhaps irrefutable proof) that guitarist Chuck Wayne was the composer of one of the most well-known songs in modern jazz, namely "Solar" as popularized by Miles Davis in the early-1950s. Wayne had long made the claim, so it wasn't a revelation, but this was the first time any of us were able to hear the guitarist playing the popular line. Two of the better blogs devoted to jazz, Doug Ramsey's Rifftides and Marc Myers JazzWax quickly jumped on the story. As could be expected, reader comments and Facebook exchanges quickly focused on Miles Davis's appropriation of the tune. A very obviously polarizing topic, I wanted to put the spotlight here on the facts as best as they could be researched: what we do know, rather than pure speculation.

"Solar" was recorded by trumpeter Miles Davis on April 3, 1954 at Rudy Van Gelder's studio in Hackensack, New Jersey. On the 4-song session for Prestige Records, he was accompanied by Dave Schildkraut (alto sax), Horace Silver (piano), Percy Heath (bass), and Connie Kay (drums). It was his third session since cleaning up his act the previous year. It's release came at a very interesting time, just after the 78 rpm era and just before 12-inch LPs gained the popularity that they were to enjoy for the next few decades. The public had it's first opportunity to hear the recording later in 1954 or in early 1955 (Prestige Records release dates, particularly early ones are very illusive) as the lead-off track of Prestige PrLP 185, a 10-inch 33 rpm LP, titled simply "Miles Davis Quintet". Songwriting credit was given to Davis and the composition publisher listed as Prestige Music-BMI. 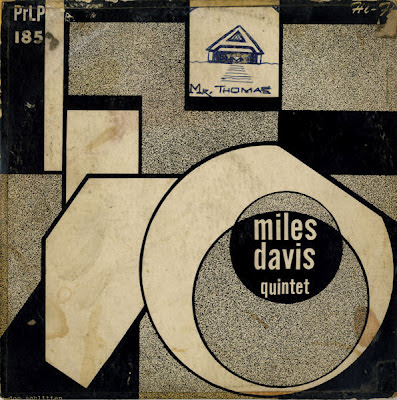 Oddly, the copyright paperwork for the composition is not dated until August 8, 1963. This is not entirely unusual as copyrights were often filed some time after a recording was released. But in this case there was nearly a 10-year lag. Perhaps this was a simple clerical error on the part of Prestige Records. Perhaps. 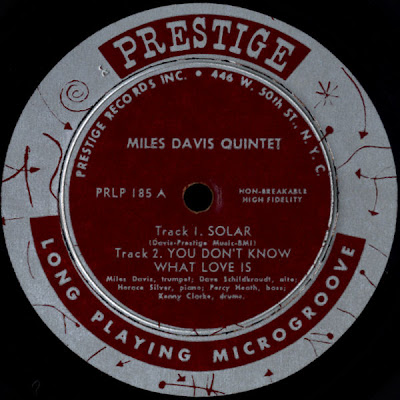 "Sonny" was recorded by the song's composer Chuck Wayne and the song's title subject, Sonny Berman, some time in 1946 in Oklahoma City, Oklahoma. The newly discovered acetate includes a total of 4 songs and although described as a "jam" it is very clear that the arrangement of "Sonny" is quite worked-out in advance. The other musicians (piano and drums at the very least) have yet to be identified. It is assumed that the recording was made while Wayne and Berman were on the road with Woody Herman's Orchestra. I've yet to confirm any 1946 concert dates in Oklahoma City by Herman, but I am sure someone will turn this information up to help further pinpoint when this was recorded. Interestingly the song is listed as "Sunny" on the label, which could very well be a clerical error or could the be the original title spelling for all we know. When referring to it over the years, I've seen given "Sonny" as the accepted title. 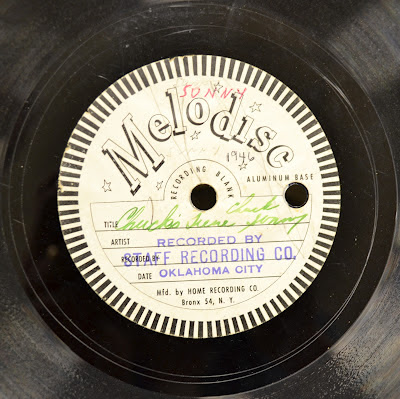 "Sonny" is a bop-influenced line based on the changes of Nancy Hamilton and Morgan Lewis's "How High The Moon" - a tune that later got nick-named the "National Anthem of Bebop" due to it's popularity with modernists at jam sessions and on recording dates. Woody Herman would eventually record a version of the song, Shorty Rogers's "More Moon" in 1949, but "Sonny" is not referenced in the arrangement. Now is probably a good time to mention that when Davis eventually recorded "Solar" he did change the progression and form of the tune so that it no longer adhered to the "How High The Moon" chord changes. 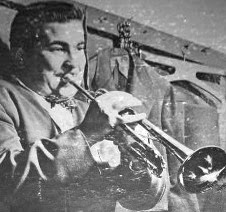 In many ways Saul "Sonny" Berman was the great white hope of bebop trumpet. He was one of the first white horn men to play in the modern style and quickly became one of the most admired and popular, primarily through his association with Woody Herman's First Herd as well as his recordings for Ross Russell's Dial Records. He died in early 1947 at the age of 21 of a supposed drug overdose leaving a handful of recordings behind that have since been cherished by some fans of modern jazz. I highly recommend this radio segment if you are interested in hearing some more samples of his playing.

Although it is certain that they met several times over the course of their careers, there are only two documented dates on which Miles Davis and Chuck Wayne shared the same stage. On April 25-26, 1952 Miles joined pianist Beryl Booker's quintet at Birdland in Manhattan. Chuck Wayne was the Booker's guitarist at the time. WJZ broadcast portions of each night. Neither "Sonny" nor "How High The Moon" were performed. But could "Sonny" have been in the band book?

But all of this leaves us with the question: how did Miles cop the line? Enter Bill Crow. The 85-year old bassist has played with an astounding number of greats and is a legend in his own right. In addition to the numerous recording sessions he has appeared on, Crow was responsible of the wonderful Jazz Anecdote books. He maintains a website of his own filled with many of his personal anecdotes. It is here that he addresses the question and states the Berman played the song for Davis! According to Crow, Davis was visiting the Herman band (which had to have been in 1946 due to the timeline inferred above) and Sonny played Miles the line Chuck wrote. Very interesting indeed. But that isn't all. Crow then left a comment on the aforementioned Rifftides blog on July 5th stating that when Wayne confronted Miles about the tune, Davis replied, "Oh, are you the cat that showed me that? Well...sue me."

I'm not going to join the chorus of those who wish to berate Davis. I dig Miles. Not as much as some, but certainly more than many. I do think it is important to remember that he was a bandleader and a personality in addition to being a musician. There is a certainly amount of added expectations and responsibilities that come with each of those roles. At the same time, I don't agree with Marc Myers defense of Davis however by placing it in the on the shoulder of the context of the times. It's a bit of a cop out for me. And Myers introduction of race into this particular discussion is not really relevant in my opinion. But as always, he provides much food for thought and posted this excellent follow-up on another tune popularized by Miles but in dispute, "Walkin". Otherwise some of the best dialogue I have yet to read on this can be found in the comments section of Doug Ramsey's page. Listen to the sound clips and follow the links.

At the end of the day the important thing is that it is the Summer of 2012 and people are talking (passionately, I should add) about Chuck Wayne, Sonny Berman, and Miles Davis!
Posted by Nick Rossi at 7:07 AM