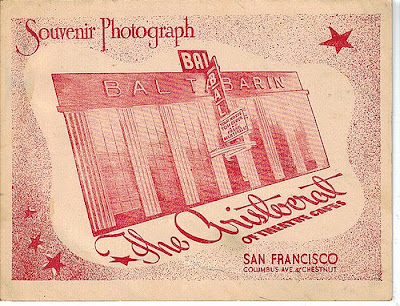 Hands-down, no questions about it, one of my all-time favorite San Francisco spots is Bimbo's 365 Club on the Northern edge of North Beach. I have been to few locations anywhere that have been both so well historically well-preserved and run as a vibrant business. Of course, it doesn't hurt that it's a night club and a TRUE night club at that complete with white table cloths, a coat check, and bath room attendants.
One of the interesting things about the club is that, while it is one of the longest running night spots in the City, it has only been Bimbo's since 1951. The Bal Tabarin was opened at 1025 Columbus Avenue in 1931 by ex-bandleader Tom Gerun. Gerun's orchestra was known around town for "hot jazz" (in a City very WELL known for hot jazz). Taking it's name from a Parisian nightery home to a can-can troupe, it was a standard night club of the era featuring dinner, dancing, and entertainment featuring (of course) a floor show. A typical night would see a bill of 3 or 4 acts plus a line of eight dancing girls. Most of it's notoriety outside of the City at the time was perhaps due to the "live" broadcasts from the stage courtesy of NBC (whose West Coast radio operations were based on SF from 1927 until moving to LA in 1938). The building itself remains a gem. With exteriors and interiors designed by Timothy Pflueger, it reflected art deco design in transition, closer perhaps to what was called Streamline Moderne. Incidentally, Pflueger who would also go on to design The Top of The Mark in The Mark Hopkins Hotel and The Cirque Room in The Fairmont Hotel was also responsible for the post-Prohibition renovations of the Bal Tarabain in 1933. Four years later, dancer Ann Miller reportedly was "discovered" by Lucille Ball at the club while performing.
Unfortunately, I don't have much information as to why the club changed hands. It seems to have been successful through the 1940s. As always, I welcome any contributions from any of you out there.
Be sure to check out this Flickr Photostream for some great guest shots in the club.
Posted by Nick Rossi at 3:03 AM

My wife's mother was one of that line of dancing girls at the club.

The Bal Tabarin thrived throughout the war years but by 1947 business had dropped off so badly that owners Tom Gerun and his partner Frank Martinelli closed the club for several weeks while looking for a name attraction that could attract bigger crowds.

They gave it one more try including live radio broadcasts from the club but the writing was on the wall so by the end of the 40s Bimbo was wanting to move from 365 Market Street and the deal was done.

Thanks for the comment and the additional information. It sounds as if the club was another post-war recession casualty. Fortunately, it's transformation to Bimbo's help preserve it in some form for those of us who came much later.

One of the other partners in the Bal Tabarin was Bob Grison, who owned Grison's Steak House on Van Ness & Pacific, which is now Harris'. He ran the kitchen

Good knowledge Chris! I did not realize that is where Grison's was.

I was going through my 93 year old mom's house and found a 6 page book from the Bal Tabarin that had a menu and ads and the names of all the girls that were dancers. It is sooo cool. My mom went to her nurses training in San Francisco. I will send pictures if anyone is interested.