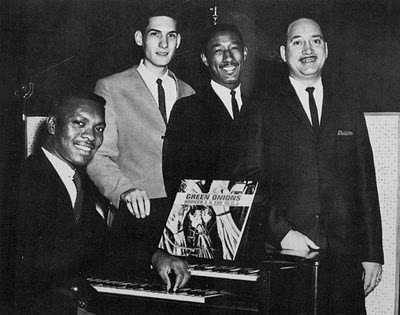 I recently rented and watched Respect Yourself: The Stax Records Story and was somewhat disappointed. Chips Moman, Lewie Steinberg, and Packy Axton all got the short shrift to say the least. After grousing a bit on Facebook, I gave it a lot of thought. Admittedly, I do know quite a bit more than the average person about Stax and it's history, but my fear is that through these "definitive" statements, some folks often just end up getting marginalized - no disrespect intended to any of those involved with the documentary (or any other attempts to tell the story). So here are a couple of bits I culled over the years about the legendary Stax house band...
The MG's (or M.G.s or MG's or M.G.'s - all these variations appeared on their early singles and LPs) were "formed" in June 1962. While the actual date is unknown (early Stax session logs are not very helpful it would seem), it was recalled by participants to be a rare-for-the-label Sunday session. The focus was to be Billy Lee Riley who may or may not have recorded a couple tracks with a pulled-together backing band consisting of Booker T. Jones (Hammond organ), Steve Cropper (guitar), Lewis Steinberg (bass), and Al Jackson, Jr. (drums). All had done recording work for the label, but it was quite possibly the first time the four had played together as a quartet with no additional musicians. In fact, the first call drummer may not have been Jackson. Howard Grimes who appeared on a number of early Stax sessions - including a number of Mar-Keys recordings, missed the phone call for the session.
MG has come to be stand for "Memphis Group" in many of the official bios and blurbs. But the footnote version is a little more complicated. Initially, "The MGs" referred to the British sports car. Yes, a bit eccentric for the early 1960s in Tennessee, but true all the same. In fact, the instrumental combo who proceeded The MGs was named The Triumphs after producer Chips Moman's British sports car. Once "Green Onions" took off and the pick-up group had been established as a bona-fide recording act/house band (and not to mention, once Moman was out of the picture) - perhaps as late as the Al Bell era - publicity started to carry the more widely-known definition. In fact, if anyone knows the first mention of this, I would love to hear from you via the comments section.
One final note. Bass man Lewie Steinberg (pictured above, far right) played on every Booker T & MGs recording through the end of 1964 including both of their first 2 LPs. Lewie is still with us, living in Memphis. Wouldn't it be GREAT to read a full length interview with the man himself? His involvement in Memphis music goes deep, long before the Stax-era. Again, if anyone knows of any good links to Steinberg, please let me know.
Posted by Nick Rossi at 4:03 PM