When I was a child, I used to love spending time flipping through my parents modest LP collection. I was fascinated by the format: the photos or illustrations on the front, the long text on back, the titles on the spines, and the smell. Yes, the smell. They just intrigued me. I seldom listened to them (I don't think I was allowed to, but I don't necessarily recall that being a negative thing.). I was content to just flip through and looked.

One of these LPs was the original film soundtrack recording of West Side Story. It was probably my mother's. The bold stark red and black cover is fairly well burned in my brain. Oddly enough, I don't recall hearing it played around the house. Chicago? Sure. Steely Dan? Of course. But no West Side Story. Perhaps this added to its mystique. 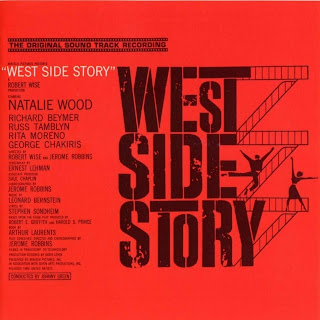 Years later I finally saw the film in its entirety, but I never really went back and connected the LP with the film. I think this is largely due to the graphics of the film. Wonderful as they are, they don't have a direct connection with the LP jacket art - something of an anomoly in the second half of the 20th Century. 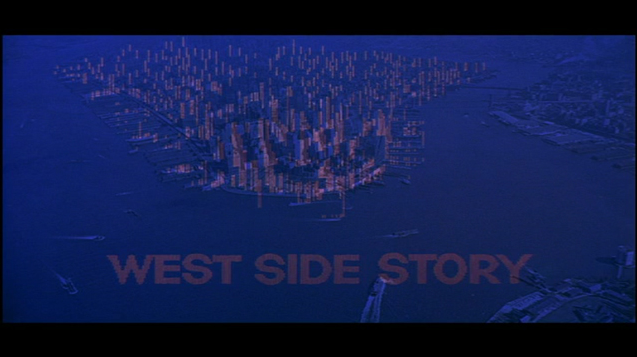 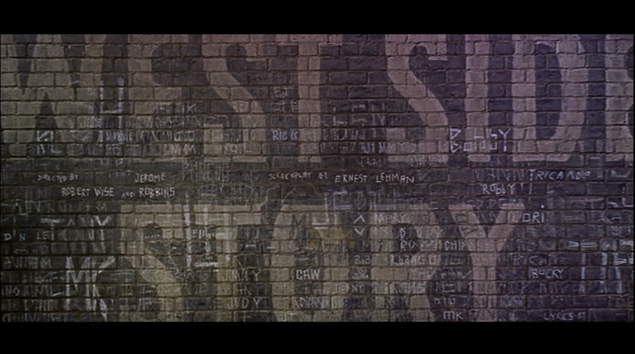 The titles in the movie were credited to the great Saul Bass. And, of course, you know Saul Bass. He did it all and more. Interestingly he was also credited with "visual consultation" on West Side Story. My mind can't help but wondering if he had any input on the color palate of the film. With all of the talent tied up in the production of this movie I would expect not, but with little to work with it does raise questions. I am also curious about the "photographic effects" credited to Linwood Dunn. This could very well relate to the opening sequence, but again I don't have much information to go on. If anyone has some good links on this, I would love to hear from you.

Fast forward to last week when I heard a recording from the original Broadway cast recording of the musical. It was a random occurrence on a JetBlue flight from JFK back home to San Francisco. I was knocked out by the performance and hit YouTube for more (and, yes, eventually ordered a copy of the disc so that I may listen to it properly). Over the course of YouTubin' I stumbled upon the clip at the top of this post. It's very early example of a teaser trailer that was produced by Eyvind Earle in anticipation of the film's Autumn 1961 release. The original 1957 Broadway production had a very successful run of 732 performances and production of the film did garner some press at the time, so there was some expectation in advance of the movie hitting the theaters.

Earle (1916-2000) was an interesting character whose design career spanned both Coasts and several disciplines. His chronology reads like a modernist's dream: film, advertising, commercial design, and the fine arts. He even did a stint with Walt Disney during one of the latter's most interesting periods. I'll leave it up to you to follow the links to go into deeper detail, but highlight two of personal interest to me. First of all he created the Welch's Grape Juice stand mural in Fantasyland. Another childhood memory of mine is making sure we always went here for grape juice. Why? First, I loved grape juice. Second, I was fascinated by the mural behind the counter! Obviously inspired by the Beethoven segment of 1940's Fantasia, it featured figures from Greek mythology - another childhood interest of mind. This was a Disneyland visit ritual for me and my family (along with going on The Pirates of The Caribbean first) until Fantasyland was remodeled in 1983.

Behind the scenes, it turns out Earle did not get along terribly well with his Disney cohorts. More to the point they resented the carte blanche Walt gave him on Sleeping Beauty. Produced from 1951 until 1958 and finally released in January of 1959, it was a tremendous visual departure from anything that had come before it (or has come since). And once one dig's into Earle's visual style, one will easily see how much he was responsible for the final look of the film in spite of "only" being the film's Color Stylist and Background Director (long-time Disney-man Ken Anderson was ostensibly the film's Art Director). Again, it is animated film that has long stood out from the Disney canon for me, mostly as it was so odd. I think it may be high time for a repeat viewing.


Side note: the score to Sleeping Beauty was mostly based on Tchaikovsky's ballet of the same name, again hearkening back to Fantasia.

By the time Sleeping Beauty was released, Earle had been eased out of Disney and begin freelancing around Los Angeles. He re-kindled his relationship with United Artists (going back to 1934) and ended up working on the film trailer for West Side Story for them. And therein is the illusive LP graphic! If I had to hazard a guess Bass provided some of the basic imagery, perhaps including the main title block, while much of the remainder is the work of Earle's. To back this up and as a comparison, here is a 1961 television commercial for Chevrolet by Earle that strongly parallels the trailer.

Although I have yet to read it, Earle wrote an autobiography. Coincidentally, the first ever book on Saul Bass was just published earlier this month. Again, I have yet to see/read it, but it certainly looks enticing. Sleeping Beauty was restored and re-released in 2008 and is available on most popular formats. West Side Story is enjoying a resurgence in popularity due to its revival on Broadway and beyond, but the originals are still pretty much untouchable.
Posted by Nick Rossi at 1:55 PM