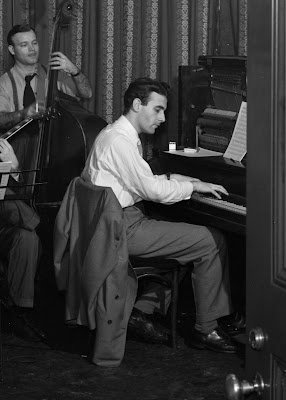 A belated Happy Birthday to pianist, arranger, and musical director Donn Trenner. Donn was born in New Haven, Connecticut on March 10, 1927 and has been in the music business since the age of 15. After many long, storied years he is back in Connecticut and often performs in New York City. His list of musical associations is just amazing, having performed and/or recorded with everyone from such modern jazz men as Charles Mingus and Stan Getz, to vocalists such as Nancy Wilson and Lena Horne...and not to mention legends such as Ben Webster. But of particular interest to readers is the fact that Donn Trenner is the member of a very exclusive club. A club whose membership is dwindling by the year. Donn is a rare bird indeed as he is one of the last surviving musicians to have played with Charlie Parker! 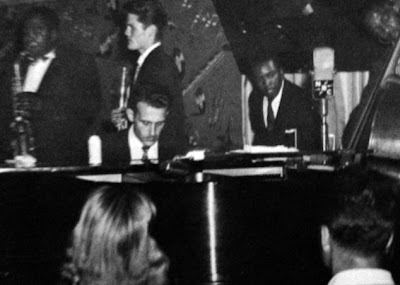 To be honest, this may be just another footnote that I read with great interest, but then moved on to fill my head with more musical and historical knowledge, if it weren't for vocalist Shaynee Rainbolt who commented on a post of mine last year. One thing led to another and I found myself exchanging messages with Donn himself. So I took the opportunity to use this connection to ask Donn to go a little deeper into his association with Bird. The facts are pretty straight-forward. On May 29, 1952 the Charlie Parker Quintet opened up for a two and a half week run at The Tiffany Club in Los Angeles. The Tiffany Club was located at 3260 8th Street near the corner of Normandie, a part of LA was jumpin' in the early 1950s. The Haig club was just Northeast a few blocks, not to mention The Cocoanut Grove in The Ambassador Hotel. But that stretch of 8th Street itself was a hub with the 400 Club, The 331, and Agua Caliente all easily within walking distance from one another. Bird by this time had begun his latter-day association with Norman Granz and had most recently recorded for Mercury Records with the Joe Lippman Orchestra back in March in New York. Most of his live appearances at this stage of his career were as a single, that is appearing as a solo star backed by trio or quartet consisting of local musicians. Although Trenner spoke to James Gavin in depth for the latter's dark portrait of Chet Baker, Deep in a Dream, Donn was kind enough to answer some questions of my own about the experience:

A Modernist: Had you played with Parker before the rehearsals for the Tiffany engagement?

Donn Trenner: No, I had never played with him before 1952.

AM: Tell me about how you got the call for the gig

DT: I received a call from an agent. The agent was Associated Booking Corporation. It's the same agency that Joe Glaser had in New York, only they had a Beverly Hills office. Cliff Aaronson called me and asked me if I would like to put the band together for Bird. And of course I said yes!

AM: What prompted you to hire the musicians you hired?

DT: I had some information from Cliff, that he [Parker] would like to have Larance Marable. And I think that he mentioned Chet Baker, although I knew Chet from all over for a long time. The story that Chet told was totally fictitious. It wasn't a trumpet competition, I called him and hired him.

AM: Did suffer any blowback from the other local musicians who you did not call for the gig?

DT: No, I did not suffer any fallout from anyone for not giving them a call.

AM: How about the claims that Parker changed his playing to allow for Baker's supposed deficiencies?

DT: I don't remember anything about Bird changing his playing to accomodate Baker's playing level. It's very possible. Although Chet was a wonderful player - perhaps inexperienced at that time in his own career, he played very well.

AM: Do you have any particular memories of Bird?

DT: My memories of Charlie were unbelievable. I remember that he loved Mexican food. So very often on breaks at The Tiffany Club we would take him over to a Mexican restaurant and he would stuff himself. He drank a lot. And he put it down rather quickly. But I found him delightful. Very personable. I found no friction or tension in the engagement with him.

AM: How about that photo of Helen Carr with the band?

DT: Of course, Helen sat in one night and that was the night that I guess Bill Claxton was there and took that picture.

Gavin's book provides some more info about the legend that sprang up regarding Baker's selection as the trumpeter in the combo. I can't really recommend the book (it's a tough read at times), but you can take a peek here.

If you want to dive a bit deeper into some of the highlights of Trenner's musical adventures, I strongly recommend this lengthy interview with Donn conducted by Harry Platcow. Enjoy!

Very nice interview regarding that gig. Thanks for getting it down and thanks for the plug.
-harry-

Thanks for stopping by Harry and thanks for the wonderful interview you conducted with Donn. My piece is just the tip of the iceberg as you well know!