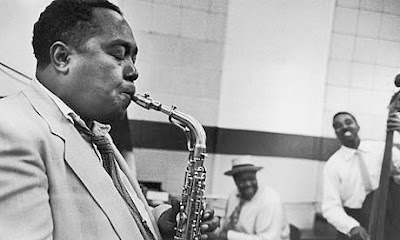 Today, Wednesday, August 29, 2012 marks the 92nd anniversary of the birth of the great Charlie Parker. Fortunately, there continues to be a tremendous amount of interest in (perhaps) the greatest modern jazz musician of the 20th Century. 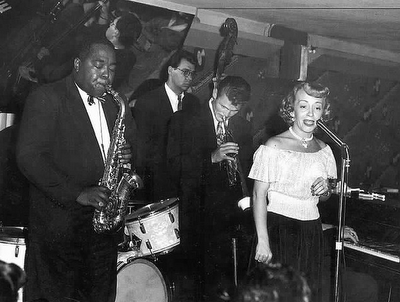 I had planned on using the top photo of Bird in the recording studio for what was eventually released  as the first of Norman Granz' Jam Session LPs on Mercury Records, but this post covered the photo end of the topic much better than I could. By the way 4 sides were recorded that July day (actual date unknown) at Radio Recorders - and by sides I mean sides: each tune took up the entire side of a 33 1/3 RPM 12-inch disc.

I will also direct you to the above. This excellent 60-minute BBC documentary is both a great place to start for beginning Bird watchers as well as fans like myself who have already devoured a fair amount of info on the subject matter. Thanks to Marc over at JazzWax for originally bringing this to my attention.

Finally, WKCR in New York is in the middle of their annual 72-hour back-to-back Lester Young/Charlie Parker birthday broadcast. If you jump now, you may still catch it. Otherwise, mark your calendars for next year, browse around their programming schedule, and maybe kick down a little cash if you can afford to do so.
Posted by Nick Rossi at 1:10 PM

phil schaap is proud of you

Oh, I think Phil would be severely disappointed by this post!

Hi there,
The photo with Bird, Baker and Carr had Donn Trenner on the Piano. He asked me to tell you so you could credit the photo properly. Thanks! www.donntrenner.com

Thank you very much Shaynee. Please send my apologies to Donn for leaving him out. I will update and repost.