A buddy and I were recently discussing the notion that there was NO way Fred Astaire could succeed in today's entertainment world. A stylish man with that much grace? No way. I am adamant about this. And it is a real shame as Astaire was SO talented and such an amazing artist. No he wasn't just an artist, he was an absolute artistic force. Just dig this 1958 television special. 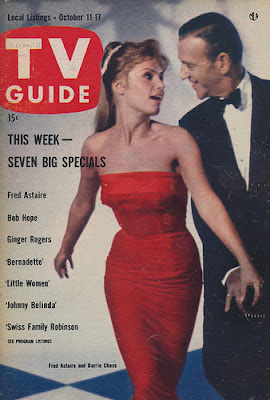 The clips do a good job of laying out the details, so I will be brief. This was originally broadcast nationwide on NBC-TV on October 17, 1958. I was recorded, in color, on videotape (an early use color videotape, I should add) in Burbank, Calif. at NBC-TV's Color City Studios. Color TV had been in development since the late-1940s (the first color CRT patent application was dated 1947) and introduced to the consumer market in 1954. Almost needless to say, this was the early days of the medium and very few viewers were able to see this entertainment special as it was intended. It would be another 3 years before Walt Disney's Wonderful World of Color special in September 1961 would really gave the market a push. In spite of the challenges, An Evening with Fred Astaire enjoyed impressive ratings and was the recipient of several Emmy awards.

Now scroll back up to the top of this entry, sit back, and enjoy all 5 parts of the show (complete with original commercials)!
Posted by Nick Rossi at 7:07 AM

astaire was one of the great artists of the 20th century

singer, dancer, actor etc..hell, he probably was a good cook

gives you an idea to fred's prowess

Thanks for the comments and kind words. That Mel Torme disc has long been on my list. I'm a big fan of '50s Mel. I've also always been curious about "The Astaire Story" on Verve with Barney Kessel, Oscar Peterson, et. al.

I don't think I'd want to live in a world that wouldn't be able to appreciate Fred Astaire. Thank you for these beautiful moments!

You are welcome, I am glad that you enjoyed them.

This is on dvd thanks