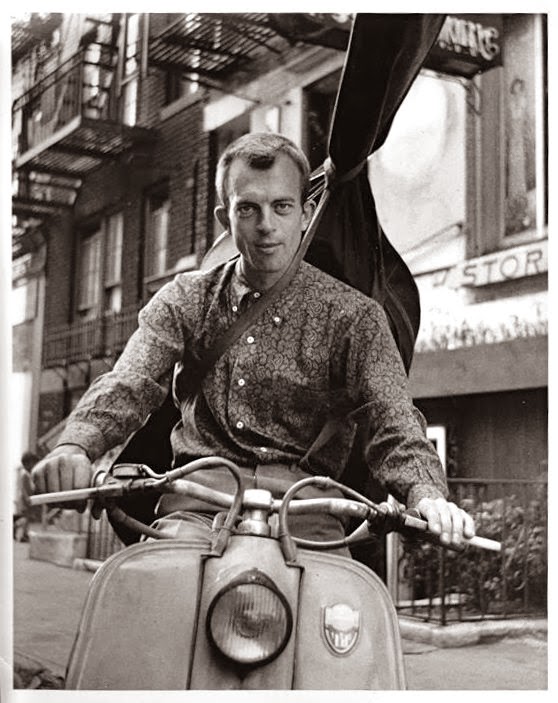 Jazz legend Bill Crow is a generous man. Not only was he kind enough to grant me permission to reproduce the above photo on today's post, but he spent some time answering a few questions that I thought would be of interest. Rarely on this blog do I explore the Italian motor-scooter aspect of the 20th Century modernist dispora, but this wonderful photo deserves some extra attention.

"I was living at 22 Cornelia Street in Manhattan in those days on the second floor. Cornelia Street only had parking on the east side and when the city went to alternate side parking, that street was only park-able on Tuesdays and Thursdays. I was driving an old Ford and was having so much trouble parking it that I sold it. I knew the writer Arnold Perl, who had a Lambretta over in the East Village. It may have been the first one in Manhattan. I realized that I could wheel it through my building and park it in the back yard so I bought one, their smallest model, from an agency in the west 50s that was selling them and figured out a way to carry the bass on it. I carried a small board with me that I could use to help me wheel the scooter up the three steps on my stoop at 22 Cornelia and I would chain it to a tree in the back yard."

The one-time blacklisted writer Perl has a fascinating tale of his own that certainly should be told in full some day. But back to our story. Crow was fortunate at the time to have a steady gig 3 miles uptown as part of pianist Marian McPartland's trio. He continues:

"At that time I was working six nights a week at the Hickory House on West 52nd Street and I left my bass there every night unless I had a record date or something. It was nice to ride the scooter midtown from my Village apartment and I could park it easily at the curb. I only carried the bass on it when I had a different job. While I was still living on Cornelia Street, the movie photographer Aram Avakian (George Avakian’s brother) shot a lot of footage of me carrying the bass on the scooter, which he intended to use in a documentary that he was planning about New York jazz clubs, but the film was sent to some funding organization in an appeal for a grant and I never heard any more about it."

Bill and I have discussed Avakian and film-making on these pages before (see link above), as that latter had an important role in the making of Jazz on a Summer's Day. Bill eventually found out that there was more to scootering than commuting for work:

"I took it camping one autumn, when Marian McPartland took 3 weeks off from the Hickory House to go home to England for a visit. I packed a pup tent and a sleeping bag on the luggage rack and drove up through the Adirondacks, up into Montreal, down along Lake Champlain, up to Baxter State Park in Maine, down to Acadia National Park, and on down the coast to Boston, where I met Marian who came back from England via Boston to visit some friends. We had lunch together and then I headed back to NYC. I stayed on the smallest roads I could find which still had a hard surface and really enjoyed seeing the northeast that way."

In 1956, Crow began a musical association with baritone saxophonist, composer, arranger, and bandleader Gerry Mulligan that would continue intermittently for several years. Mulligan was a bona fide international jazz star at the time which afforded Bill some unique opportunities:

"When I went to Italy around 1959 with Gerry Mulligan, I went to the Lambretta factory in Milano and bought a new scooter and had it shipped to New York. I sold the old one and I kept the new one in a garage on 7th Avenue next to Nick's. In the early 1960s I moved to West 20th Street in Chelsea and found another garage nearby where I kept the scooter chained to a water pipe."

I asked Bill what finally signaled the end of this relationship with Lambrettas:

"When I returned from a later trip to Europe with Mulligan, I went to pick up the scooter and found that it had been smashed against the wall of the garage by a car or truck. The garage men claimed to not have noticed the damage. Their insurance company finally paid for the repairs, but I had already decided to buy a Volkswagen and I sold the scooter."

Thanks once again to Bill Crow for his time and consideration. It is truly an honor to have made his acquaintance via the internet.

**A footnote: according to Lambretta's official history; founded in 1947, the Milan, Italy motor-scooter manufacturing company did not start its USA division until 1955. Lambrettas were only available in a few American cities and in very limited quantities before that time.

Fantastic. Have reblogged on The Syllabus - hope you don't mind.

Not at all John, I am glad that you appreciated the photo and post. Did you my message re: Rome?

great work, Nick! Love the possibilities suggested by the Lambretta as diasporic culture!

Thanks Laura. I need to do some more research on Lambretta's early presence in America. NYC is one of the few places where there is any evidence of the company having some success Stateside in the 1950s. If you get a chance, watch that 'Greenwich Village Sunday' short film (1960) that I posted a couple of weeks ago as part of the Ted Joans piece I did. You can see a couple more shots of Italian motor-scooters buzzing around. Of course it makes sense…but the topic has now piqued my curiosity.

Superb Nick. I have some of Bill's writings about his life in jazz and it's great to hear those stories retold. Nice to see an emblematic BD as early as 58, too.

Excellent! Very cool pic and interview with Mr.Crow--thank you for posting.

Thank you for the comments, gentlemen. I am glad to see that you appreciated this.