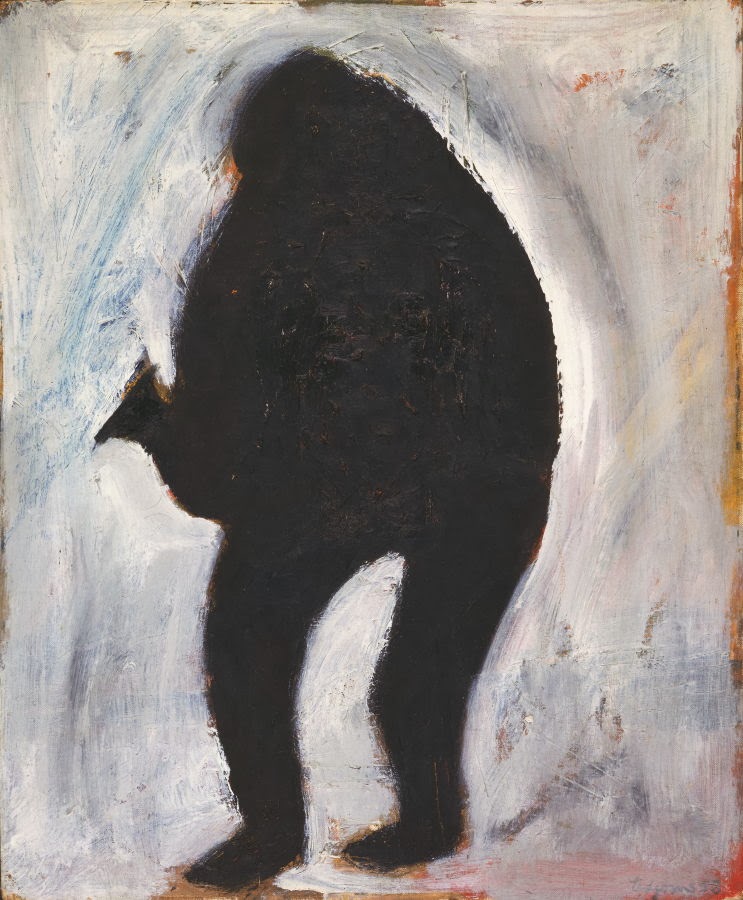 Bird Lives! oil on canvas board painting by Ted Joans, 1958, courtesy of the de Young Museum, currently on exhibit through January 2015

The death of Charlie Parker on March 12, 1955 had both an immediate and lasting impact on the New York art community. It wasn't just the musicians who grieved and grappled with the truth that Bird was dead, the painters and poets too strongly felt the loss of one of their idols. He was a hero made flesh: many of them knew Parker as much from seeing him around their Greenwich Village and Lower East Side (there wasn't an East Village yet) neighborhoods as much as they did from his stage appearances. Of course, they knew his records and would check him out at The Open Door on West 3rd Street when they could afford to do so, but the notion of the starving artist wasn't a punchline once upon a time. 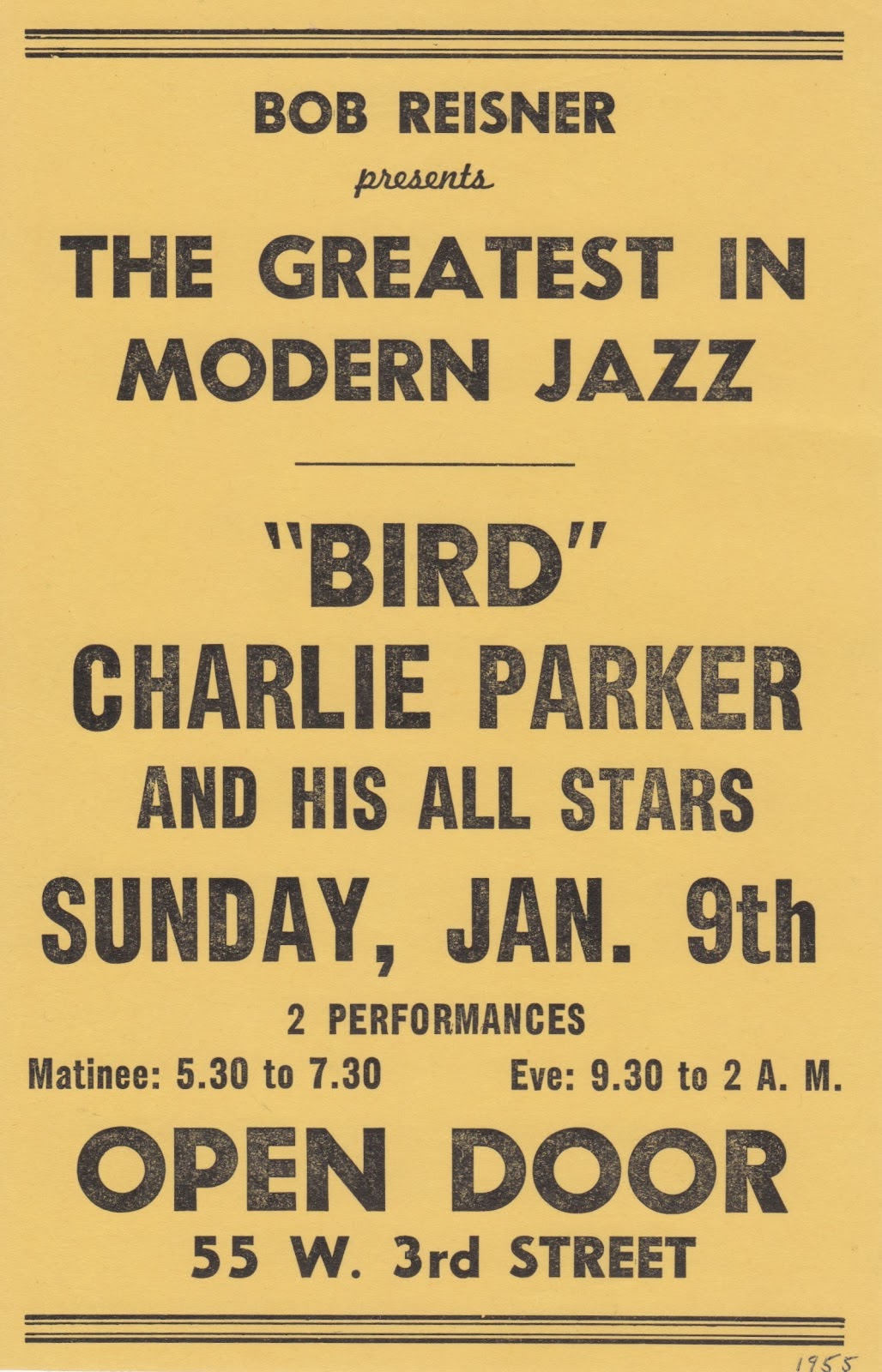 According to the somewhat controversial record producer and writer Ross Russell, who owned Dial Records and who recorded some of Parker's most critically acclaimed music, within "a few days of the alto player's death there appeared among the graffiti on the walls in the Village and in subways, scrawled in black crayon or squirted out of pressurized paint canisters, the legend 'Bird Lives!" (Bird Lives: The High Life and Hard Times of Charlie (Yardbird) Parker by Ross Russell, New York; Charterhouse, 1973). Years later it was poet Ted Joans who was credited as the instigator of the graffiti. 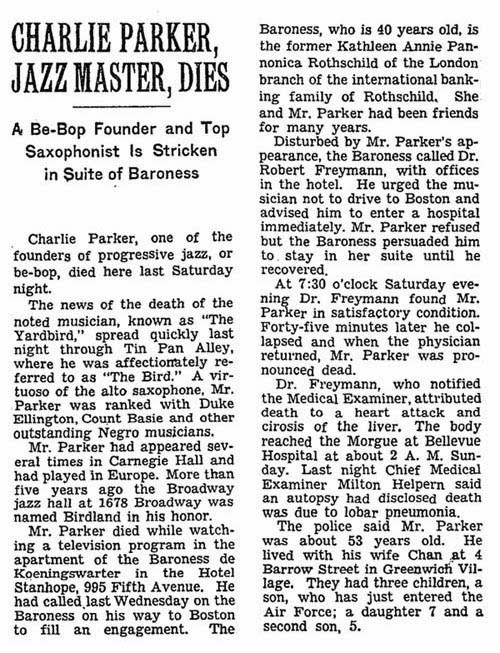 Ted Joans knew Charlie Parker and knew him somewhat well. Not too long after Joans arrival on the scene, he become known for his elaborate parties often costumed affairs. Author and promoter of the 1950s jazz sessions Robert Reisner claims that Bird turned up for one of these parties dressed as a Mau Mau and supposedly the January 1955 issue of John Preston Davis' groundbreaking African-American journal Our World featured one such party with Parker visible in the background. After returning from an extended engagement in Chicago in that same month, Bird was more or less a transient who relied upon the goodwill and couch space of others for shelter. At the time Joans shared a small apartment at 4 Barrow Street in the Village (don't go looking for it, it has been razed) just off of Sheridan Square and across the street from the Cafe Bohemia (that building is still there, occupied by the Barrow Street Ale House) and his roommate Ahmed Basheer brought a sick Parker home one night after finding Bird sprawled out on the sidewalk near their front door. As a result, Parker and Joans were de facto roommates off and on during last 2 months of the saxophonist's life. 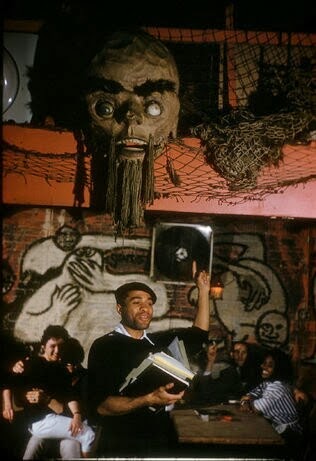 But just calling Ted Joans a poet is doing his legacy a disservice. Yes he was indeed a poet. In fact, he is now often referred to as one of of the original beat poets. Joans moved to Greenwich Village in 1951 around the age of 23 having moved to the big city from Illinois by way of Indiana University. Sadly, the history of the Beat Generation seems to have suffered from some degree of whitewashing as Joans seldom appears as more than a mere footnote. But he was clearly one of the first on the scene, connecting Gregory Corso not long after his arrival. He would later cite his biggest influences as Langston Hughes and André Breton. For his part, he thought himself as much as surrealist as he did a beatnik, although he certainly took advantage of the public interest in the latter as a way to have a forum for his art. By the time of his death in 2003, Joans had authored well over 30 books a remarkable body of work for any poet by anyone's standards. 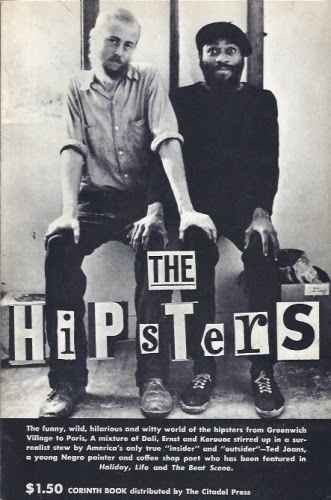 Joans creativity did not end with the printed word. At one point of time he was a trumpeter, although he reportedly threw his horn off a bridge as he felt the need to focus on other aspects of his life (this again according to Russell). He was a visual artist as well. Although largely known as a recluse, Joans befriended the Jackson Pollock and got to know the painter before Pollock died in the Summer of 1956. Joans most certainly was a painter, although examples of his work are relatively scarce both online and in the real world. However, one of his surviving works is from 1958 and is fittingly (for our story at least) titled Bird Lives!

The is only the tip of the iceberg that is the fascinating story of Ted Joans. I highly recommend digging deeper.

As a teaser, here are a couple of short films that feature Joans a few years after the death of Charlie Parker. Bird Lives indeed!

Village Sunday by Stewart Wilensky, USA, 1960
(click on image above for fullscreen view)

Jazz and Poetry by Louis van Gasteren, Holland, 1964
(click through for a better screen view)
Posted by Nick Rossi at 12:11 PM

Thank YOU very much. I am glad that you enjoyed it.