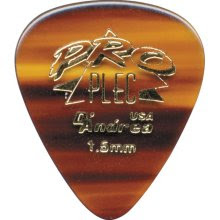 Near the end of last year, I was in Gryphon Stringed Instruments in Palo Alto trying to sort out a few spare parts for my recently purchased 1947 Epiphone Broadway guitar. It just so happened that the fellow helping me was luthier Steve Saperstein - something completely unbeknownst to me at the time. I had just recently gone down the rabbit hole of guitar picks and after spending far too much time on the Internet had decided the take the plunge and purchase a very expensive imitation tortoise shell plectrum.
Aren't they all tortoise shell, you ask? Well, interestingly no. Guitarists started using plectrums (similar to what pluck the strings in a harpsichord) some time in the 1800s and one of the early substrates that found favor was actual tortoise shell. But this material was expensive, somewhat fragile and eventually became illegal to use in 1973. At the same time that guitar players started picking the strings with things other than feathers or fingers, what later became known celluloid was first invented in England. In the spirit of the Industrial Age, it was soon being used for every item imaginable and by 1872 was known as celluloid in the USA.
Anyhow back to Palo Alto last year. Being somewhat insecure, I asked Steve what he thought of this expensive imitation tortoise shell pick. In fact, the older generation of jazz guitar men (or so I had read), swore by their old tortoise shell picks for its tone, feel, and durability. Well, Steve kind of blew the picks off and handed me a D'Andrea Pro Plec saying, "I've always been able to get a good sound out of these." Well, at less that $10 for a dozen it was a fraction of the cost of the other pick and frankly it had substance and both felt AND looked good. Sure, why not? I figured I would give it a try. I liked Steve, he seemed knowledgeable, and it was just a minimum risk.
I've been using the picks ever since. I just love them. Steve was right, one can get a really nice sound out of them. Not one to gush, but they might be the best pick I have ever used. And, yes, I have tried quite a few.
But there is something else about this item that would appeal to folks on a broader level. The picks are manufactured by D'Andrea in New York. You can (and should) read about their history here, but I will summarize. 1922, Luigi D'Andrea is credited with the first use of celluloid for guitar picks. Yes indeed, what became the predominant guitar pick material can be traced back to this company, not too long ago. The company developed scores of different shapes over the years, but is also credited with developing the most common shape used, their number 351 (see the photo above). Unfortunately, I could not find a date associated with this shape, but it surely was early on as nearly every pick maker had adopted the shape by late-1950s. Perhaps most surprisingly in this day and age, the company is still owned by the D'Andrea family and still make the picks here in the USA of celluloid material imported from Italy.
Posted by Nick Rossi at 2:14 PM

surfed in on gill melle
blue note covers galore
wardell gray
wkcr
d'andrea picks
47 epis
shades
contempo furniture
who is this guy?
and then from out the fog....

the monarch with the mickey baker jazzmaster!
figures

It looks as if I've been found out! Seriously though, thanks for checking out the blog. Always happy to entertain. Best wishes.

entertaining in the best sense only!
i realize the scholarly efforts of the historian
behind it all. bravo

Thank you for the kind applause.