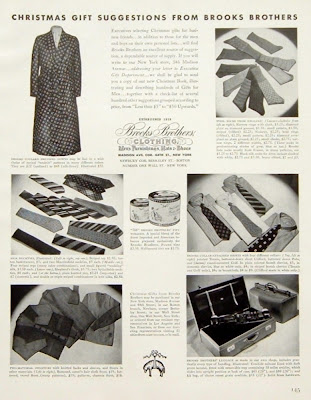 Brooks Brothers print advertisements from the archive, all dated 1939. It is truly remarkable how little changed with the clothier for many, many years. Small concessions to contemporary conventions aside, there is a lot of recognizable aspects to all four of these ads. So much so, that it is easy to see why what many know today as Ivy League style or The Look, was widely known as the Brooks Brothers look for quite some time. I recall reading Graham Marsh's written introduction to the 1991 compendium of Blue Note cover art not long after it was released, where he made mention of still being able to get a Brooks button down with an air of assurance that some things had not changed. As I was just starting to get into that aspect of style at the time and still preoccupied with looking '60s, I did not get it. But over the years those written words became a little touchstone and looking at the above images from nearly 75 years ago when the world was a strikingly differently place - I do take some comfort that one can still stroll down Madison Avenue in New York City, pop into number 346, and buy a Brooks Brothers button-down shirt.
Posted by Nick Rossi at 7:55 AM