Today, April 29th, is the 112th anniversary of the birth of Duke Ellington. Frankly it should be celebrated MUCH more than it is. However, I will spare you a rant. Instead I encourage you to turn off this computer right now and go play a Duke Ellington record. Or listen to the Duke on your computer while you read this (WKCR 89.9 PM New York City devotes their entire day's programming to Duke all day long today). Even better, go toiTunes and gift some music to someone else you know that might not have any Ellington in their collection.
I thought I would use the occasion as an excuse to post a photo of Duke's long-time guitarist (and banjoist before that), Fred Guy, who was associated with The Maestro's organizations from 1925-1949. 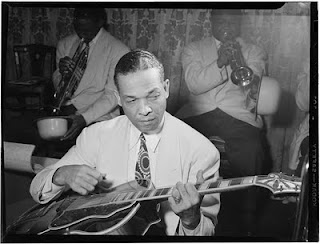 Fred Guy
October 29 or 30, 1946
The Aquarium Restaurant, New York, New York
Photographed by William Gottlieb
Let's start with the musician, Unfortunately, a painfully small amount of information is available on Guy. In short, he was born in Georgia just a month shy of 2 years before Ellington and grew up in New York City. He worked on his own as well as with Joseph C. Smith's dance band before joining Duke Ellington's Washingtonians in the Spring of 1925. Interestingly, he replaced the former bandleader of Duke's band, Elmer Snowden. Side note: Snowden has a San Francisco connection as he ended up in the Bay Area in the early 1960s and played with Turk Murphy! But back to Fred. As a couple of online writers have noted, his banjo playing is much more notable in many respects on the early Ellington sides if only because he is much more audible. Once he switched to guitar in the early 1930s he fell into the role of the classic swing guitarist, often felt more than heard on those old shellac discs. He is on most of Ellington's recordings during this era and can be seen in most of the few film clips of the orchestra. He departed from the group at a time when less and less big bands (the few that were left, I should qualify) were using a guitarist in their ranks. Duke never replaced him and to my knowledge never worked with another guitar player on a regular basis. Guy reportedly ended up in Chicago and managed a ballroom in the 1950s, although I have yet to turn up any specifics. He passed away in the year of my birth 1971.
The date of the photo is accurate within a day due to other shots from the same session. The late, great William Gottlieb photographed several wonderful shots of the Duke and his men this evening, all of which are available via the Library of Congress site. What helps determine the date is the presence of Django Reinhardt in several shots, who had just arrived in the United States and would soon appear with the Orchestra. We can thank the Django fanatics for providing a date.
Speaking of Django, Gottlieb snapped a couple of shots of the legend playing what turns out to be Fred Guy's archtop. For some time, these photos were a red herring for Djangologists as it was thought to have been a guitar he used, but it would seem these shots were just for the photographic occasion.
The guitar, itself, is a Levin. Never heard of it? Neither had I. At one point of time it was thought to have been Stromberg or Epiphone oddity, it was a Levin De Luxe circa 1937-1939. Another interesting point, Levin was a Swedish manufacturer, although the founder Herman Carlson had traveled to the United States at the beginning of the 20th Century and learned his craft there. But how the heck did Fred end up with it? If I had to hazard a guess, he picked it up on Duke's 1939 European tour. 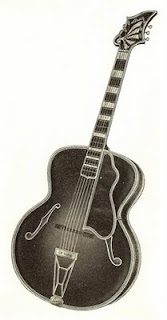 By the way, you can purchase this VERY guitar on eBay. I am not kidding. Fred Guy's guitar is on eBay as I type this. Unbelievable.
Not much has survived the ages about The Aquarium Restaurant. It was located at 701 Seventh Avenue at 47th Street. A quick visit to the address courtesy of Google reveals that while the old building still stands, a sbarro now occupies the space. I won't even go into how many kinds of wrong that is. The slight balm though is the presence of Tad's Steaks next door. 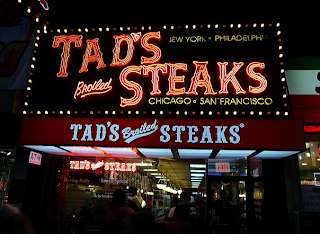 One final aside. Check out the positioning of the guitar in the above photo. To contemporary guitarists, it might seem a little odd, but it is classic swing guitar positioning. In short this was a way a for un-amplified guitarists of this era to not only hear themselves but to be heard by the band and dancers. For more on this topic, head on over to Jonathan Stout's well-written and researched Swing Guitar Blog. Jonathan is quite a student of history when it comes to swing guitar and is currently performing with one of my favorite West Coast combos, D.J. Bonebreak's (yes, the drummer from X) Bonebreak Syncopators.
Happy Duke's Day Everyone!
Posted by Nick Rossi at 3:20 PM

For us living in Denmark, Levin guitars were familiar to us back in the 1960s and 1979s. At that time they were also available under the brand name of Goya in US.

I once read, but have lost the source. that Fred Guy died by his own hand.

Whatever, it was tough getting noticed as a guitar sideman until Goodman took up Charlie Christian. Unlike him, Guy was a self-effacing character. He must have regretted the eclipse of the banjo in urban jazz-- maybe felt to be too corny and minstrelsy by the Thirties?

At least Mr Guy could look back on a quarter-century holding his place in 'the best band of them all'.

That is interesting and the first time I heard that piece of news. I will definitely investigate further. With the widespread collapse of the Big Band economy after World War 2, so many guitar players were left out in the cold - not to mention the limelight. Thanks for taking the time to comment.

You are correct, Fred Guy did commit suicide. I have more information if you want the whole story at www.petrinvintageguitars.com this is a site showing Fred Guys Levin guitar, etc.