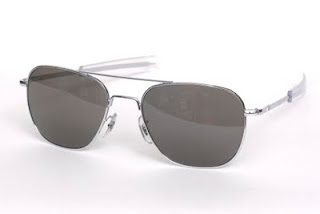 American Optical Eyewear, Inc. has been making eyewear right here in the US of A since 1833. It can trace its origins back to William Beecher in 1826 and you can read their full story here. Other interesting date-related facts worth reading about include their first sunglasses (1876), their introduction of Ulta-Violet protection (1913), and polarized lenses (1940). But perhaps AO, Inc. is most well-known for their association with the US military.
The design of the ubiquitous "aviator" sunglass generally credited to Ray Ban is, its classic egg-shaped glass favored by pilots around the time of the Second World War. Interestingly, pilots did not wear sunglasses while flying at this time, so their popularity had to have been reserved out of the cockpit. The most well-known Ray Ban man at the time? General Douglas MacArthur, of course. 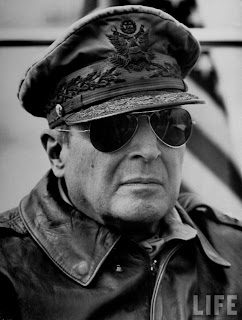 A quick sidenote: the earliest hipsters (and I mean that in the true sense of the word), I have seen sporting aviators are in this photo of Afro-Cuban musicians in NYC from the late 1940s. By the way, that is Arsenio Rodriguez in the dark suit and tie in the center and Machito on the far right. Legendary bandleaders both. 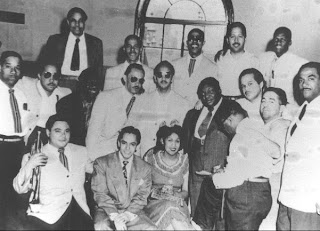 But I digress.
American Optical, too, was producing and supplying aviator sunglasses to the military during World War II. In fact, they had been supplying sunglasses to the military as far back as the First World War, long before Ray Ban existed as a company. It was a fairly common practice for the quartermaster of any given branch of the military to source common goods such as these from multiple suppliers - take a look at the history of military watches some time for ample examples.
1958 saw the introduction of a newly-designed aviator sunglass courtesy of American Optical. And for my money, it is a design classic that surpasses the Ray Ban aviator. Its semi-rectangluar lenses have become almost as iconic as its egg-shaped predecessor. Living up to the modernist axiom of form following function, Flight Goggle 58 (as it was initially known) was/is streamlined and to the point. Their popularity quickly eclipsed that of the other aviator style for much of the subsequent decade, perhaps reaching a figurative and literal high point when they were the first sunglasses on the moon in 1969. 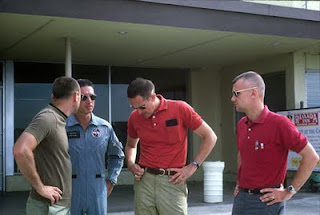 Jim Irwin (in blue) with fellow astronauts Alan Bean, Charlie Duke and Bruce McCandless before the July 1969 Apollo 11 launch.
Over the years, the popularity of the 58s has waxed and waned, but they have definitely seen an upsurge in popularity, again as an alternative to the egg-shaped aviators that ever Tom, Dick, and Supermodel seems to be sporting these days, irregardless of social status, political views, or face shape. But the 58s are around. Look for the discerning gentleman. And you can (in part) thank Don Draper while you are at it... 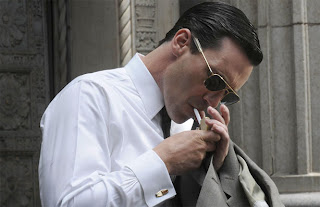 I will leave you with one piece of advice. If you get the itch for a pair, don't settle for any cheap (or expensive) imitations. You can purchase a pair of genuine American Optical Flight Goggle 58s (now called Original Pilot Sunglasses) direct form AO here. They are still made right here in the USA, with every customization option imaginable (within the confines of good taste of course). Be sure to order direct from them, it's worth the few extra dollars to know exactly what you are getting.
Posted by Nick Rossi at 3:03 AM

Nice article. I had only known about the Ray Ban aviators. I really like the AO specs. I may get a pair. My current favorite sunglasses are the Ray Ban Olympian II, in gold.

I've long admired the Olympian IIs as well Jay. It's nice that so many options are available these days. I will say that one of the other nice things about the AO aviators is that they are available in 3 sizes. The Ray Ban version of the 58s were just too small on my face.

I got a pair of 58's at Fort Polk, LA when I was in the Army in 1990 and wore them till they were inoperable, replaced them with another pair bought at Ft. Dix and those are still holding up, though the straight arms on them don't keep them from falling off my face when I lean or bend forward!

What I do like about the current offering is that you can customize and get over-the-ear wrapped arms. Since I have been using mine while "active" (hiking, kayaking, etc.), this has turned out to be quite a big point in their favor.

I'm a proud owner of two pairs of AO flight goggle 58. Really, really loving it except that I have to tighten some lose screws once in a while

I bought mine 30 years ago while in college. I still have them in great condition. A true American quality.

I'm a big fan of the AO Flight Goggle 58/Original Pilot Sunglass. The history, quality, and the fact that they are all USA are big selling points for me. I'm very particular about sunglasses, I don't like novelty, and many just don't feel right on my face. But the AO's are classic, and strong enough to be bent to one's liking. The quality of the lenses themselves is first rate. Faultless clarity.

I would agree with the article, that you should buy the AO variety. Randolph Engineering makes a near identical version, which are very nice as well, but cost more, and are no better than the AO's which are the originals. So get the originals!... As a side note, I've had a pair of Randolph Engineering before, and the clear finish on the gold frame would flake. I've never had that issue with my AO's after three years with the same pair. No cheap, metrosexual designer junk here. A real man's look, and an excellent product.

Yes, the bayonet style temples can slide off but understand their purpose: they can be put on and taken off while wearing headsets or helmets. Other style temples really require a lot of face-wrestling or helmet removal to put on and take off. Not that you really need to do that very often. (just saying, is all)

I am about to buy polarized randolph aviators, on the internet everyone says they have better finishes, I don't know, the ao are the originals: they did that design, in my opinion randolph copied them and made several variations color etc. Ao was born a height where I think years before Randolph that Randolph also makes spectacular glasses, now I have 2 questions, 1 the polarization of the ao lenses or are Randolph's? 2 I should buy the ao for "originality" or the randolphs for small improvements (such as the finishing of the writing, the slightly better plastic of the nose rests, etc. Whitout having the 2 models in hand I can't judge if the randolphs are really special best,)? I'm waiting for an answer...