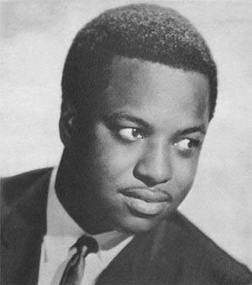 1964 Promotional Photograph
Photographer Unknown
Alvin Robinson. Al Robinson. Shine. All names point back to one of the best voices in New Orleans Rhythm & Blues - who just never quite made it - but who left behind a string of excellent singles, some of them as close to perfect as you'd ever want to get. No less than Jerry Lieber, who produced a couple of Robinson's singles, stated in Hound Dog (his autobiography with Mike Stoller) that he would, "...put Alvin up against Ray Charles, James Brown - you name 'em." Now THAT is really saying something.
I first heard Robinson round about 1990 or so. I had recently moved to the San Francisco-Bay Area and was spending most of my weekends over in Berkeley with scene its self-styled mods. Now these weren't your average suburban kids in parkas listening to Two-Tone and 80s power pop that I had grown up with - they were the closest thing (in my mind's eye at the time, at least) to the my understanding of what the original mod thing was all about. Needless to say much of my weekend soundtrack consisted of 1950s-1960s R&B, from Chicago blues to soul music. At some point of time I got the gumption to ask one of the top DJs, Seth "Soul" Roehl, to make me an R&B compilation. What he delivered was 90 minutes of some of the best music ever recorded. Cheekily titled, "British Bashers", it consisted of original versions of tunes covered by 1960s UK groups such as The Beatles, The Rolling Stones, The Spencer Davis Group, etc. And somewhere on this cassette tape were not one by TWO tunes by the great Alvin Robinson: "Let The Good Times Roll" and "Something You Got."
"Something You Got" was an easy one. I knew the tune well. Van Morrison and Them had covered it on their second LP that my girlfriend at the time had. Chris Kenner had written it and scored a minor hit well before I was born, so perhaps it was already in my subconscious thanks to oldies radio. Why Seth chose to include the Robinson version - I don't know - I just chalk it up to excellent taste. "Let The Good Times Roll" was a little more obscure - or so I thought. I soon found out that the tune (as recorded by Robinson) had been a long time favorite of California R&B revivalist Ron Silva going back to his days with The Crawdaddys in the 1980s. Silva, at the time, was performing alongside Bart Davenport and Xan McCurdy (both of whom later played with me in The Loved Ones) in a R&B combo called The Driving Wheels. They walked the line between 1960s British style and American source material. Silva had quite an affinity towards New Orleans R&B, although where and when he discovered this fairly obscure single remains unknown to me and is perhaps a topic for another time. No matter. The point is, I was hooked.
[OK, one more tangent and then we will get back to Robinson. Interestingly I DID know the tune "Let The Good Times Roll" really well at the time. But I knew it as "Come On, Part 1" written by Earl King and recorded by Jimi Hendrix in 1968. In fact, I had covered that version along with John Kent (yes, another Loved One) in one of our suburban garage bands in high school. Being somewhat literary minded at the time, I was puzzled by the songwriting credit of Earl King. I knew the Johann Wolfgang von Goethe poem "The Erl-King" and a little bit about the mythology around it, but couldn't connect the lyric with the poem. Frankly, I just thought it was something Hendrix wrote and that the credit was one of those 1960s cosmic jokes that I had heard about. Little did I know at the time. More on Earl King some other time]
And finally back to Alvin Robinson. So why is he on my mind today? Well, one of the best weblogs around on New Orleans music, home of the groove, recently posted an excellent piece on the man. I HIGHLY recommend that you read that here. Robinson was partially featured in an earlier H.O. the G. post here. And fortunately his legacy has not gone unrecognized elsewhere by some of the best bloggers around. In fact, two of my favorites have spilled some virtual ink in his name. Red Kelly over at The "B" Side gave him the usually Red Kelly customary and very in-depth treatment here. And a couple of years before that, my friend Larry Grogan who runs several excellent music blogs, provided this nice overview of his Lieber & Stoller recordings which you can find here. Which takes us back to my intro paragraph and means that's all I got to say on the matter...for the time being.
Now kick back and listen to a few tunes by the man...
9/15/10 Update - Second part of the home of the groove spotlight has been posted here.
Posted by Nick Rossi at 7:45 AM

"Something You Got" and "Let The Good Times Roll" both figure large for me too Nick. Both courtesy an influential friend. Thanks for the extra info and links. Great blog.
CB

Late on the comment, but reading this makes me want to pull out some of my old mix tapes from when I first moved to the Bay Area. JK made me a great one of songs the Loved Ones used to cover early on.

It also makes me want to start revisiting a lot of that old r&b music in general. (And, of course, I always dig reading bits here and there are people's Berkeley Mod experiences!)

sounds like you and I are on the same page although you're a youngster by comparison. Please loo up my piece on Sonny Rollins 80th birthday bash at http://edcolettip3.blogspot.com/

Seems like you and I are on the same page. Check out my piece on Ed Cerrulitti's jazz blog at http://edcolettip3.blogspot.com/

Additional note: Robinson's "Something You Got" was Wolfman Jack's favorite record. (I know this because I was Wolf's biographer.)