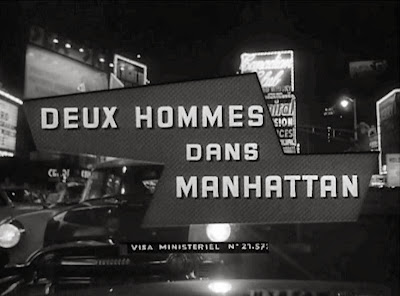 Released in France in October of 1959, Deux Hommes Dans Manhattan was director Jean-Pierre Melville's fifth feature film. A life-long Americanophile, the movie was one of only two that Melville shot in the United States. 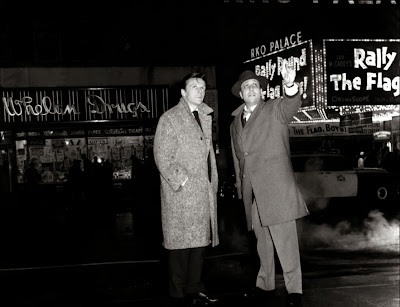 Cinema scholars and historians don't usually place Melville alongside the directors of what is now known as the French New Wave. Stylistically and thematically he was never entirely in sync with Godard, et. al. and he was several years older than many of the marquee names of that generation. That said, he was a mentor and inspiration to many of those film-makers. He also shared their love of American films, although he unashamedly loved big name productions rather than the more obscure favorites of the youngsters he inspired. 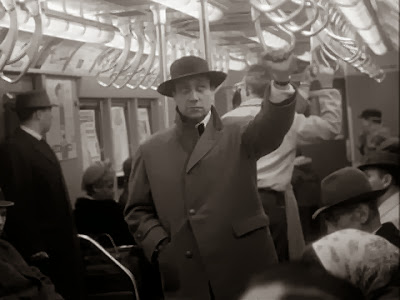 Deux Hommes Dans Manhattan treads some interesting ground between the "crime story" films that Melville would spend much of the remainder of his career pursuing and American film noir. The notion of film noir, of course, was something of a French construct in first place, it's moniker having been coined by French film critic Nino Frank in the mid-1940s. Melville's film comes at the end of the noir era and perhaps can be viewed as something of an homage to some of his inspirations that loosely fit stylistically into that genre. 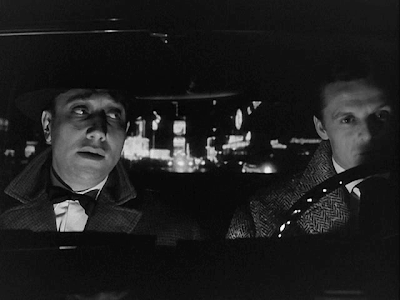 There are also elements of what many consider French New Wave in the film: the film's pace and its moral ambiguity come immediately to mind. Interestingly enough, the location shots show this side of the film most explicitly, perhaps due to budget constraints and Melville's preferences when the camera was actually in his hand. New York is beautifully filmed and mostly done so at night, something very few American directors had done successfully up until that point. That said, the film sits very comfortably alongside - if not in between - Alexander Mackendrick's Sweet Smell of Success (1957) and John Cassavetes Shadows (1957-1959). I mention the former for its shared DNA of probing the somewhat sordid layer that exists just beneath the surface of Gotham society. The latter has the same feel of guerrilla film-making at times, although Melville's work shows no signs of improvisation. 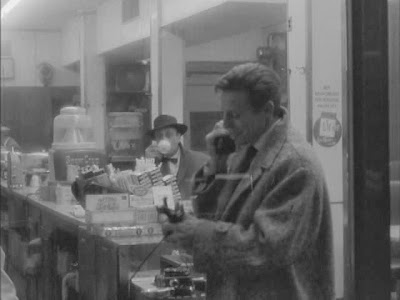 All 3 films also share a driving jazz soundtrack, which by 1959 had become a signifier of sorts and almost requisite if one wanted to make a gritty film about big city living. In the case of Melville's film the bulk of the "jazz score" was provided by pianist Martial Solal making his debut as a film composer. Solal went on to compose the score to Jean-Luc Godard's groundbreaking À bout de souffle (aka Breathless) the year after this film, something he is perhaps best known for in spite of a career spent on the bandstand with some of the top names in French and American jazz. Incidentally, thanks to all of the interiors being shot by Melville in Paris, Solal may be seen briefly in a cameo as the pianist in the Pike Slip Inn scene. 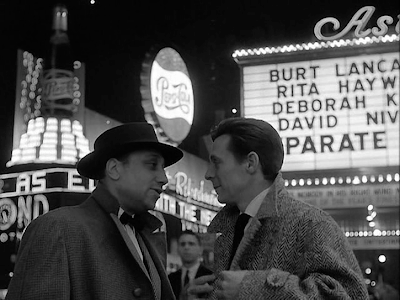 As Deux Hommes Dans Manhattan went unreleased Stateside in 1959, it has been relegated to rep houses and film festivals for years, taking on an almost mythic quality due to its content, subject matter, and place in Melville's own film-making history. It was a box office flop, which seemingly did have some influence on Melville's subsequent career direction. It is a welcome surprise to see it now available on DVD and Blu-Ray from the Cohen Media Group (no relation to the contemporary American fraternal film-makers). Fans of noir, new wave, or just the crime jazz zeitgeist of the late-1950s will no doubt appreciate it at least one time around, while dyed-in-the-wool Melville fans (such as yours truly) look forward to being view another one of his films repeatedly with a critical eye.
Posted by Nick Rossi at 1:01 AM

Nick, I highly recommend Melville's bio, "An American in Paris". It's worth seeking out if you have the chance. This is one of my favorite films btw - great blog entry, as always!

Thanks for the recommendation and the comments. I will add it to my reading list.