If Richard Quine's 1958 film, Bell Book and Candle, had starred a different pair of lead actors it quite likely would not have been somewhat doomed to obscurity. But as it was the second 1958 pairing of James Stewart and Kim Novac released nearly 8 months after Alfred Hitchcock's Vertigo, it has not received the same re-evaluation that Hitch's now broadly praised classic has. Oddly enough, Bell Book and Candle, received more notoriety at the time of release garnering a Golden Globe nomination for Best Motion Picture (Comedy) as well as two minor Academy Award nominations. Vertigo, somewhat famously, was met with a lukewarm popular and critical reception upon its release. As we all know, the retrospective view changed significantly.

So what about Bell Book and Candle? Well, I could bore you with a plot synopsis, but let's just watch the original trailer and dispense with that formality, shall we?

In short, it's a wonderfully entertaining way to spend 106 minutes of your time. Originally a stage play, the 1950 Broadway run borrowed its plot-line somewhat from a 1942 Fredric March/Veronica Lake film vehicle, I Married a Witch. Stewart and Novak carry the film well, of course. But, for me, it's the supporting cast and some of the production details that really appeal to me. 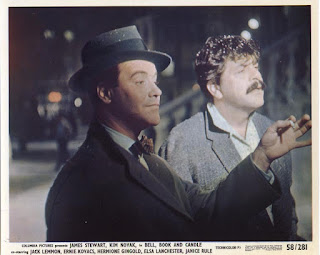 Ernie Kovacs, in many ways the first modern American comedian, had a profound influence on both television and comedy. If you are not hip to him, you should be. Fortunately, he is well represented on YouTube. He is more poorly represented in cinema, which make his performance here all that much more welcome. 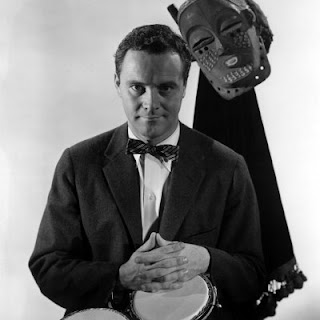 Playing Novac's warlock-of-a-brother (Did I mention Novak portrays a witch? No? You're right, I didn't. Scroll back up and watch the trailer already!) is the late, great Jack Lemmon. I could (and have) wax poetic on Lemmon as he really is one of my favorite actors from this era. But the fact that he portrays a bongo-beating, Ivy League-styled (flannel suits, bow ties abound - yes, Lemmon again proves himself to be one of the foremost exponents of what is now called "Hollywood Ivy") fellow named Nicky in this film earns this role a special place in my heart. Nicky makes his first appearance as part of the jazz combo in the fictional Zodiac Club set in Greenwich Village. No, I am not making this up and, yes, it's one of those cinematic high points for me. Here's the scene in its entirety:

Rounding out the Zodiac combo are brothers Pete and Conte Candoli on trumpets and Elek Bacsik on guitar. The Candolis should be very familiar to jazz heads as they played for a variety of orchestras in the 1940s and 1950s before settling into to steady studio work in LA in that latter decade. Bacsik is significantly more obscure. A Romani Hungarian musician and cousin to Django Reinhardt, this film was probably his first introduction to American audiences (although his appearance on record with Dizzy Gillespie 4 years later most likely helped him reach more jazz fans). By the way, the French singer onstage when Stewart and his on-screen fiancé enter the club is Phillipe Clay a singer, mime, and character actor. 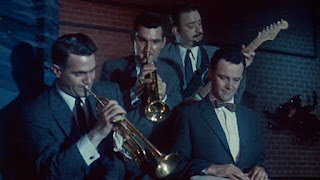