My 2010 year-end bonus was a gift card: a significant amount of money to shop at Sak's Fifth Avenue with. Downtown San Francisco features a 4-story Sak's men's shop with a wide variety of items, brands, etc. Unfortunately for me, I quickly learned two things. First, what I thought (and still think, frankly) was a significant amount of money really wasn't compared to the prices at the shop. And, second, SO much of these high-end goods were made offshore in countries well known for - let's just say, lesser quality goods. No, I have been not living under a rock. And, no, I am in no way a jingoist/nationalist/etc. But I do appreciate well crafted items, whether they be a pair of shoes or an archtop guitar. And I do like the notion of supporting businesses here in the USA (and California and San Francisco, for that matter) particularly in these days of The Great Recession. So, try as I might, I just couldn't bring myself to spending all of that money on an overpriced designer sweater made down the street from where my ragged Land's End cable-knit shawl collar sweater was hobbled together on the cheap. So after several visits, I finally used the money towards a pair of cool Oliver Peoples sunglasses. Of course, I had to pony up some cash to make up the difference. The model is called the Sheldrake. 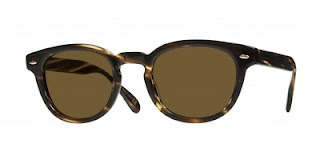 Two things I should say about Oliver Peoples. First, they retail for WAY more money than I care to pay for sunglasses. But the aforementioned gift card eased that pain. Second, they are very well made (in Japan). My reading glasses which I have had for maybe 15 years or so are by the same maker and they have held up quite well. In fact, I can think of very little that I have had for that duration of time that has held up similarly.
The Sheldrake is supposedly "inspired by Andy Warhol" - although he was furthest from my mind when I saw them and tried them on. Well that's an exaggeration. Lady Gaga was perhaps further from my mind when I saw the pair of Sheldrakes and tried them on. More of an immediate connection was Miles Davis on the cover of his 'Round About Midnight LP or any number of musicians Francis Wolff photographed while recording for Blue Note. They have that later-1950s/early-1960s look down to the keyhole nose opening. Heck, they aren't even too far off from what President Kennedy was often photographed wearing.
Where am I going with this? Well, the whole experience above is one of the reasons I have been thrift shopping more and more as of late. There are some wonderful clothes being produced out there. I can even afford some of them these days. But I still don't feel right about dropping all that cash. Plus there is something intrinsically socially conscious about recycling clothing. I've started to think of what I use and refuse as "my pile." In other words, when I shuffle off this mortal coil, I am going to leave a pile of material possessions. How big is that pile going to be? Will people be able to use what's in that heap? Something to think about - or at least something that I think about.
Today's trawling was fairly rewarding. For a mere $23.98 total, I managed to pick up a couple items of note... 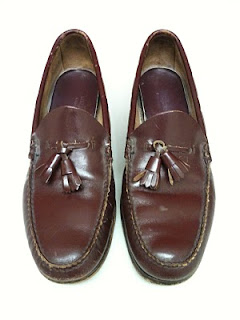 1960s Bass Weejuns. Size 10 1/2 B. The older brick red burgundy color, well before Bass switched to that kind of awful burnished brush-off finish. Made in the USA naturally, well before Bass started production of their shoes in Central America. OK, to be fair, they are too narrow for me, but I have already found a friend who wants them. With some basic cleaning and a "bullet" shine from my friends down at A. Shine & Co., they will be things of beauty. 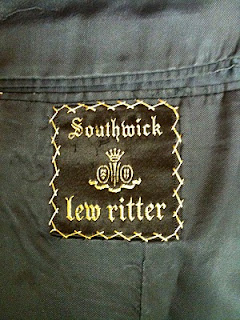 Navy blue 3-button sack blazer. Tropical-weight wool, 3/4 lined. Tailored by Southwick for Lew Ritter. Ritter had his origins in 1936 in New York City, and eventually expanded to Los Angeles in the early-1950s. To the best of my knowledge the shops have all closed. But back to the jacket. It needs a few days airing outside, but Spring is indeed here and there is no rain in the forecast until the weekend. Add a new set of buttons and I will be ready for mocktails.
I might never need to step foot back into Sak's again.
Posted by Nick Rossi at 5:09 PM

My new glasses are Oliver Peoples. Picked them up in NY. Model is the JonJon. They make nice glasses, for sure.