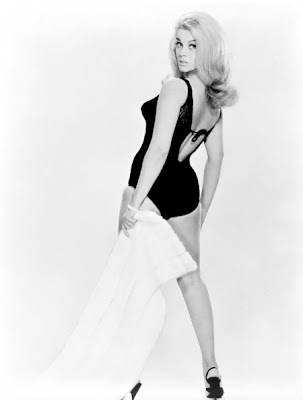 On a lark, I picked up Made in Paris over the weekend, a film directed by Boris Sagal that he shot in 1965 and was released in 1966. It's a good film - not nearly as flimsy as a lot of the light-hearted romps from the same time. In a lot of ways the film straddles the divide between "swingin' in the 60s" and the "Swingin' 60s". What I mean is that core aesthetic difference between say Ocean's Eleven and Help!. Both are from "the 60s", shot within 5 years of the other, feature major pop stars in starring roles, are in glorious color, and are chock full of hip in-jokes best appreciated by their individual audiences. And yet, it's like when you are a teenager in that a difference of 5 years might as well be a decade or a generation of that matter.

This is perhaps best illustrated in Made in Paris by the opening sequence of the film. Backed by a lightly swinging jazz score, a young beautiful Ann-Margret gets ready to hit the town with a clean-cut Chad Everett: Ms. Ann in a wardrobe designed especially for her by Helen Rose (she got to keep what she wanted as part of her contract), Everett in clean-lined dinner jacket. Where do they go? Well, to hear Count Basie & his Orchestra, of course (featuring Eddie "Lockjaw" Davis on tenor). This scene is succeeded by the opening titles over which Trini Lopez croons (or however one would describe Trini's vocal stylings) a Burt Bacharach/Hal David theme tune. Bacharach himself was a self-proclaimed product of the Bebop Era, but was so very vital to the soundtrack of the 1960s. This breezy effort screams "The Sixties" to my ears. On the fence between two worlds is what I am talking about.

In addition to great Technicolor wardrobe shots throughout there are also two really cool club scenes later in the film. The first features a groovy vibraphone-led quartet in a smoky "Paris" (quotes as I am sure this was shot Stateside) night club. I don't recognize any of the musicians - although the guitarist is playing a beautiful Fender Telecaster and tweed/airplane luggage amp. Very cool. Even cooler is Mongo Santamaria's credited appearance in an extended dance sequence. He performs "El Pussy Cat" as well as another number during which Ms. Ann does her "trying to seduce Louis Jourdan while remaining hip" dance routine. Both are worth watching a couple of times. I am pretty sure that is Hubert Laws in Mongo's band doubling on flute. Did I say "Very Cool" already? Yes? OK. Pretty damn cool.

But again the scene is somewhere between two versions/visions of the 1960s. Even the notion of a boogaloo band performing speaks illustrates the shift happening almost before our eyes. Obviously it's a topic that intrigues me immensely: when did the 1960s become "The Sixties"?

And not to go off on another tangent, but the film also left me wondering: was Ann-Margret the last great Hollywood Sex Symbol? Discuss among yourselves and get back to me via self addressed stamped envelopes, would you?
Posted by Nick Rossi at 1:38 PM

Alright, I know what we're renting this Saturday.

I like your question regarding the 1960s turning into 'the Sixties'. For me, I was always fascinated with the change from Mod (noun) to Mod (adjective) that happened in 'the Sixties'.

Update your site more now that I have access to it.

Yes, another interesting question. When did the media start using "mod" as an adjective. Certainly by 1966 - perhaps as early as 1965. I am sure someone has researched this, don't you?