Today in 1949, the Miles Davis Nonet recorded the second of three sessions which would later be repacked and marketed by Capitol Records as "The Birth of the Cool" at WOR Studios in New York City.  The first session was in January of 1949 and the final session was almost a year later.  Most of the sides were released as 78 rpm 10-inch shellac singles and then subsequently compiled on 10-inch (1953) and 12-inch (1957) LPs.  It's this last reissue that gave the group the moniker it is known as, albeit posthumously.
Much has been written about Davis, Gil Evans's "salon", the band, and the studio.  Some like to paint it out to be a pivot point in Modern Jazz away from a populist form of entertainment and in the direction of the "America's Classical Music" that many consider it to be today.  Some like to "blame" it for the cool school of jazz - which has been unjustly derided in recent history in an effort to prop up a mythos based on East Coast Hard Bop and Jazz-Funk traditions.  But taken at face value the recordings are very interesting and quite musically satisfying, neatly encapsulating many ideas which were obviously floating around at the time.  Add a little bit of history to the mix and it clearly was a crossroads of sorts - or perhaps more appropriately a point of departure. 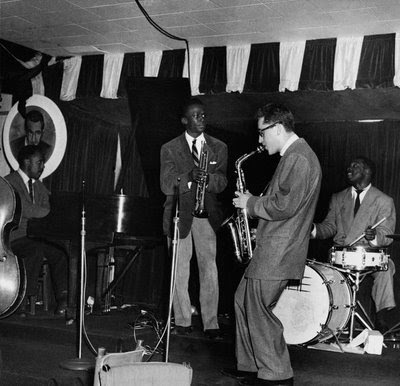 Photo by Marcel Fleiss; Bud Powell, Miles Davis, Lee Konitz, Kenny Clarke on stage at Birdland, NYC c. 1950 or 1951.  The "Birth of the Cool" band only performed one engagement, in August or September 1948 at the Royal Roost as the Miles Davis Band.  Broadcast recordings from that engagement do survive and were officially released as part of the 1998 CD reissue of the studio recordings.
Sartorial Sidebar:  Davis had already made the transition to a more ivy league style and it was just the beginning of the decade.  This somewhat detracts from this article in which the Andover Shop hints at having a larger role in his image closer to the middle of the decade. Still worth the read though and an interesting perspective.
Posted by Nick Rossi at 8:13 AM