Ever since I moved to San Francisco in 1989 I have been casually curious about the 49 Mile Scenic Drive signs that appear throughout the City. Well last weekend the wife & I decided to investigate, so after a little bit of 'net research we loaded up the car with Cal Tjader CDs and hit the road - or drive as the case may be. The original route was designed as part of the 1938 Golden Gate International Exposition - a celebration of the then recently opened Golden Gate and Bay Bridges - and led visitors from City Hall throughout the City, over the Bay Bridge, to Treasure Island and the Exposition. The Exposition was not a huge financial success (it was the depression after all), so it was reopened in 1940. One aspect of the Exposition that fascinates me is the contribution of several artists. The photo to the left is of a sculpture titled "Pacfica" done by Robert Stackpole for the initial opening. Perhaps the most well known is a mural created by Diego Rivera for the second run of the fair and currently being curated by City College of San Francisco.

But admittedly what has always fascinated me more is the sign. It was designed by then local graphic artist Rex May in 1955. I wish I knew more about May - most of the online references only point back to the 49 Mile Drive sign. Regardless it is something of a subliminal icon, if 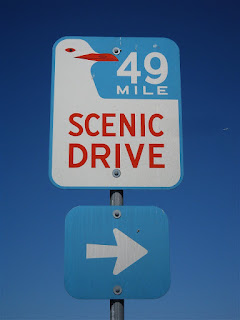 there can be such a thing. The drive now is pretty much what is has been since the mid-50s, a tour through the City hitting many of the guidebook essentials. Of course it has changed periodically, but it was interesting to drive along the "official" view of a city I have known for so long. One does need some help to navigate the route, as several signs go missing thanks to vandals or folks looking for a cheap souvenir. That said, we only really got off track 3 times over the course of the 4 hours it took to traverse all 49 miles (yes, we counted them). There were several highlights along the way, but honestly what sticks most in my mind is THAT sign...
Posted by Nick Rossi at 8:41 AM